From Susan B. Anthony:

Let me tell you what I think of bicycling. I think it has done more to emancipate women than anything else in the world. It gives women a feeling of freedom and self-reliance. I stand and rejoice every time I see a woman ride by on a wheel…the picture of free, untrammeled womanhood.

Another exhibit at the Currier Museum of Art in Manchester is “Poster Mania: Leisure, romance, and adventure in 1890s America” which consists of 90 colorful posters from the museum’s own collection. The onset of inexpensive, mass-produced, large format colored printing in the 1890s ushered in a new age of advertising in America. At the time, magazine covers were drab and colorless with the simple imprint of a logo and story titles. Publishers began using colorful posters to promote current magazine issues and soon the posters were more popular than the publications.

This boom in poster printing coincided with a bicycle boom. In 1896, for instance, Americans spent $300 million on bicycles and another $200 million on accessories and related clothing. Women were drawn to bicycles for the sense of freedom they provided from the staid drudgery of everyday life. Nearly a dozen bicycling magazines popped up around the country, several of which were dedicated to women on bicycles, like the poster shown below.

The poster boom was short-lived, however, because magazine publishers soon concluded that they could put the colorful artwork directly on their magazine covers and make the ancillary posters superfluous. 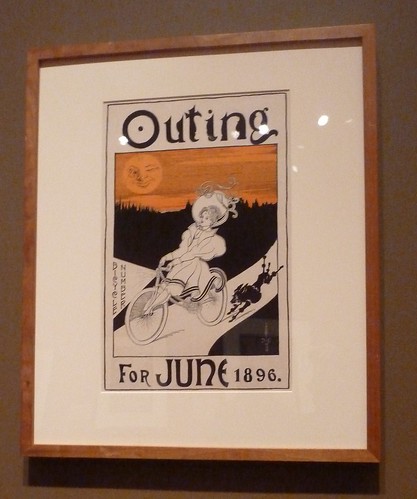