The signing by President Lyndon B. Johnson of the Medicare Act on July 30, 1965 is worthy of this re-posted  clip from the archive: 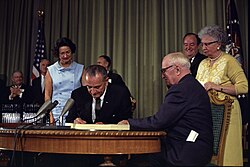 On this day July 30, 1965 President Lyndon B. Johnson signed the Medicare bill into law. Congress created Medicare under Title XVIII of the Social Security Act to provide health insurance to people age 65 and older, regardless of income or medical history. In 1972, Congress expanded Medicare eligibility to younger people who have permanent disabilities and receive Social Security Disability Insurance (SSDI) payments.

At the bill-signing ceremony, which took place at the Truman Library in Independence, Missouri,  former President Harry S. Truman was enrolled as Medicare’s first beneficiary and received the first Medicare card. Johnson wanted to recognize Truman, who, in 1945, had become the first president to propose national health insurance, an initiative that was opposed at the time by Congress.