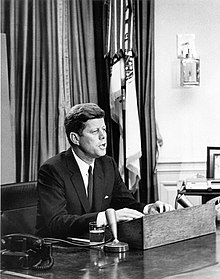 On June 11, 1963 President John F. Kennedy delivered a speech  on radio and television in which he proposed the Civil Rights Act of 1964. The address transformed civil rights from a legal issue to a moral one. President Kennedy did not live to see the fruits of this speech in which he  called upon Americans to recognize civil rights as a moral cause that all people need to contribute to. He noted “We are confronted primarily with a moral issue…. It is as old as the scriptures and is as clear as the American Constitution…. One hundred years of delay have passed since President Lincoln freed the slaves, yet their heirs… are not fully free. They are not yet freed from the bonds of injustice… this Nation… will not be fully free until all its citizens are free…. Now the time has come for this Nation to fulfill its promise.”

On this day in 1963, President John F. Kennedy  issues presidential proclamation 3542, forcing Alabama Governor George Wallace to comply with federal court orders allowing two African-American students to register for the summer session at the University of Alabama in Tuscaloosa. The proclamation ordered Wallace and all persons acting in concert with him to cease and desist from obstructing justice.

The battle between Kennedy and Wallace brought to a head the long, post-Civil War struggle between the federal government and recalcitrant southern states over the enforcement of federal desegregation laws. (More here: http://www.history.com/this-day-in-history/jfk-faces-down-defiant-governor)

Here is the full text of the speech:  http://millercenter.org/president/speeches/detail/3375