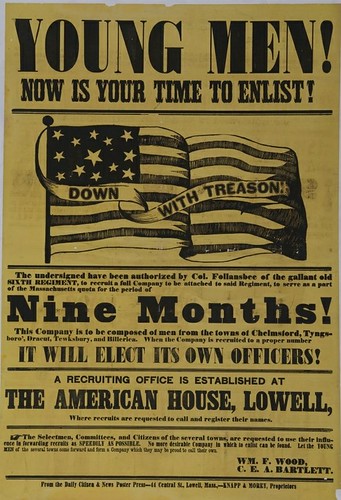 This coming Saturday, May 11, 2013, I will speak about Company K of the Sixth Massachusetts Volunteer Regiment as part of Chelmsford Civil War Day at the Chelmsford Center for the Arts, 1A North Road in Chelmsford (the former town hall). While contemplating the controversial step of instituting a national draft during the summer of 1862, President Abraham Lincoln issued a call for 300,000 volunteers to serve a term of 9 months. The Old Sixth, a Lowell-based militia regiment that had disbanded after its 90 days service at the start of the war – service that included the riot in Baltimore and the first deaths from hostile fire in the war – was revived in answer to this call for troops. Many of the veterans of the Sixth had enlisted in other units and so there was an immediate push for new recruits. There was also a need for an entirely new company since the original Sixth was smaller than wartime regiments. A new Company K was created to fill this void, recruiting its members from Greater Lowell towns such as Chelmsford, Dracut and Tewksbury. The regiment left Lowell in early September 1862 and was deployed to southeastern Virginia near Norfolk where it saw limited action but sustained losses due to disease and hostile action. It returned to Lowell in June 1863 at the completion of its term of service.

On Saturday, I will discuss this 1862 mobilization of the Sixth Regiment – how the soldiers were recruited, what their daily lives were like, and the particulars of the skirmishes and battles in which they were involved – and place it in the larger context of the history of the Sixth Regiment and of the Civil War. Please try to join us.

2 Responses to Civil War talk in Chelmsford this Saturday