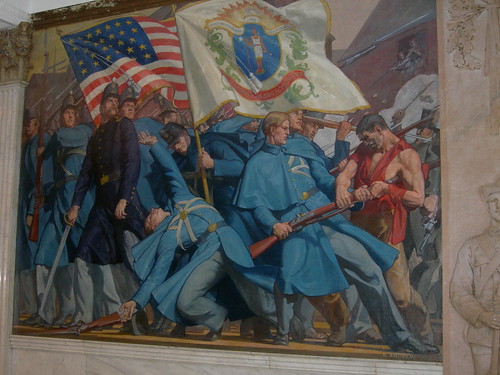 This coming Wednesday, March 21, 2013 at 7:00 p.m., I will be at the J.V. Fletcher Library in Westford (50 Main Street) to give a talk on the city of Lowell and the coming of the Civil War. This is a presentation I gave last year in Lowell and in Chelmsford that begins with the decades-long friction felt in Lowell between those who derived their wealth from the cotton mills and those who felt strongly of the need to abolish slavery. Part of the talk shows how national events such as the Fugitive Slave Act and the Kansas Nebraska Act played out in one city. Finally, the talk reviews the start of the shooting war and the role played by residents of Lowell in it.

This lecture is part of the 2013 Westford READS program which is built around the 150th anniversary of the Civil War. Here’s more from the Fletcher Library’s website:

What would happen if all of Westford read the same book? We find out this winter as Westford READS! in celebration of the 150th anniversary of the Civil War. Visit the Library now and check out either March by Geraldine Brooks (our fiction selection based upon the war experiences of chaplain Bronson Alcott, the “father” in Little Women) or Tony Horwitz’s rousing Confederates in the Attic, a non-fiction journey into the Civil War battlefields with modern re-enactors. Additionally, excerpts of the Civil War correspondence of John and William Jubb – two sons of Westford, will be available (inquire at the Information Services Desk.)

Join us, January through April, as – through book discussions, movies, music, historical lectures, bus tours and teas – we study the War Between the States and understand how the defining conflicts of nineteenth-century America have shaped our past and our shared future. All Westford READS! programs and events are made possible by the Friends of the J. V. Fletcher Library, Inc.