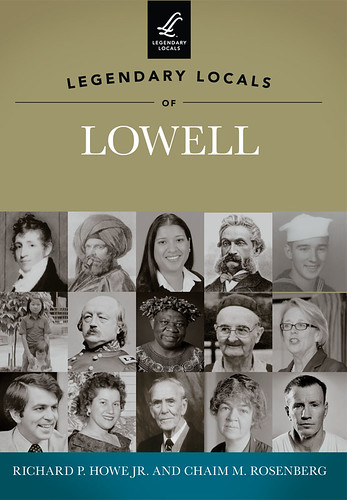 I first met my co-author, Chaim “Mike” Rosenberg, at a talk he gave on his newly published “The Life and Times of Francis Cabot Lowell, 1775-1817” at the Needham Public Library almost two years ago. From there we struck up a friendship with him taking me on a tour of the original Boston Associates mill in Waltham and me giving him a tour of Lowell Cemetery. Mike had already done two other books for Arcadia and invited me to collaborate with him on another about the mills of Lowell. We submitted our proposal to Arcadia but they had just launched the Legendary Locals series and wanted one about Lowell. Soon there was an agreement and Legendary Locals of Lowell was the result.

Here’s the back cover text from the book:

When Nathan Appleton and his colleagues built their first textile mill on the banks of the Merrimack River in 1822, they were pursuing the vision of their departed mentor, Francis Cabot Lowell. The complex system of machinery, labor, management and capital that resulted made the city that they named Lowell the centerpiece of the Industrial Revolution in America. Changes in technology and commerce made the golden age of Lowell’s mills short lived. Despite the success of businesses such as the patent medicine company of James C. Ayer, jobs remained scarce for decades. Hard times created strong leaders, people like Congresswoman Edith Nourse Rogers, who sponsored the G.I. Bill, and writer Jack Kerouac, who added a new voice to the country’s literary mix. More recently, Paul Tsongas inspired a new generation to transform Lowell into one of the most exciting mid-sized cities in post-industrial America and a world model of urban revitalization. This book tells the city’s story through pictures of its people.

The book is organized in five chapters. Mills covers the rise of the Lowell mills, their golden era, their demise and their reinvention. Business is about the industries that tried to fill the gap left by the departure of the mills such as patent medicine, printing and munitions. Community covers family, school, church and recreation. Service highlights those who served our country in the military and our community in many capacities. Culture is about those who through their words, paintings and music have made the city the interesting, distinctive place it is today.

The book is available for pre-order on Amazon and will be sold locally at stores such as Guy Lefebvre’s Lowell Gallery. There also will be public readings and booksignings which we’ll announce and promote on this site. I have created a permanent “Legendary Locals of Lowell” page which you can view HERE and which will always be accessible by clicking the “Legendary Locals of Lowell” tab at the very top right of your computer screen.

6 Responses to Legendary Locals of Lowell