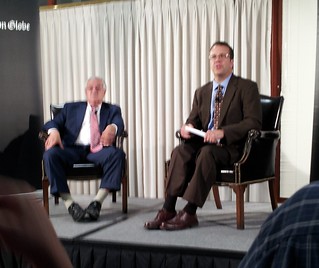 Congratulations to Glen Johnson, most recently the Boston Globe’s political editor, but remembered fondly here as one of the best City Hall reporters the city of Lowell was fortunate to have had, on his upcoming career change. Starting this Monday, Glen will work at the U.S. State Department for our new Secretary of State, John Kerry. Here’s a portion of an email broadcast Glen sent out yesterday announcing the move:

I am writing today to let you know that I am making a professional change.

After 27 years as a news reporter, I have decided to step away from daily journalism to serve Senator John Kerry as he embarks tomorrow on his new duties as secretary of state.

I will have the honor of working in Washington on the senior staff at the State Department, helping the secretary-designate communicate his foreign policy vision and priorities to both international and domestic audiences.

My duties will include traveling with the secretary and assisting him as he represents President Obama and the administration abroad and at home. It will be reminiscent of our travels from 2001 until 2003, as the senator laid the groundwork for his 2004 presidential campaign and I tagged along for The Boston Globe.

It is a humbling opportunity, especially in these turbulent times, but one that I embrace with relish.

Up to this point in my life, I have never wanted to be anything other than a reporter, to have a front seat on history and write its proverbial first draft.

That passion sustained me when I started as a government meeting stringer for The Lowell Sun, and worked my first full-time job at the fabled City News Bureau of Chicago while managing a Baskin-Robbins franchise to cover my lodging.

It carried on through stints at The Salem Evening News, the Sun as a full-timer, through a pair of tenures at both The Associated Press and the Globe, and across five presidential campaigns.

The people I have met at each workplace or campaign bus have been honest, hard-working, and public servants in their own right. I’m going to miss being one of them.

Today, I am particularly indebted to Globe Editor Brian McGrory and Metro Editor Jennifer Peter for their support as I stopped reporting and editing to embark on this transition with professional integrity.

I also owe my career and this opportunity to my wife, Cathy, and sons, Patrick and Kelley, who have put up with nights and weekends of work and incessant travel every four years, but happily kept things humming at home and relished the chance to meet the people I covered and with whom I worked and played.

I have learned just in my brief exposure to the worldwide workforce at the State Department that I am joining a corps of equal character and dedication.

I will strive to live up to their example, just as I have tried to do as a reporter.

I start my new job on Monday and will be back in touch with updated contact information.

One Response to Career Change for Glen Johnson