This is an excerpt from The Big Move: Immigrant Voices from a Mill City (Loom Press, 2011), edited by UMass Lowell history professors Bob Forrant and Christoph Strobel. The book includes nine interviews, selected from the many conducted by the historians and their team for an ethnographic study of Lowell commissioned by Lowell National Historical Park. The interviewee, Gordon Halm, came to Lowell in 1995, having left his homeland in Ghana in west Africa. He had moved from Ghana to Liberia in 1989, just before civil war broke out. He was able to leave Liberia because friends helped him get to the airport, which at the time had not been overrun by rebel fighters. He got to New York City, and then joined his wife in Lowell, whose brother had encouraged her to come over in 1989. Gordon is a community leader at the Eliot Presbyterian Church and a graduate student in the Peace and Conflict Studies program at UMass Lowell. Read more about Gordon in an excellent article by Dave Perry in the current UMass Lowell Magazine.—PM 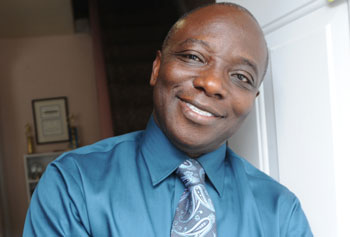 “When I started the Ghanaian Independence service at our church, many of the people from other African countries would be invited, too. After the church service, we had music and dance, and people brought all kinds of food and all that. I thought, if I’m able to put all this together, why don’t we create a festival? All of the people from different African countries would come together and showcase their culture, music, and food. That’s how the festival came about. And our kids, when they went to the festival and they saw other kids wearing traditional attire, they became proud to wear it.

“I think the church is a good place to go. Back in Africa I went to Anglican school, and the church and the school were connected. Every Sunday we had to be in the church. The church is where we learned to differentiate between good and evil. The church is considered the place where a child will be trained in a good way so that when he or she grows up they will not deviate from good Christian teachings. The Eliot Church has embraced the African community, Cambodians, Brazilians, etc. So when we go to church the spiritual peace is there. We go and worship our creator and it’s also an opportunity where we can, as church members and friends, communicate and also help one another.

“For example, if  I lose my job and I have a friend, to talk to that friend might have an opportunity to speak to his supervisor and make a recommendation. So the church is where we go for spiritual growth and also where we have a social network. When things happen to you, the church is there. It is emotional and spiritual support.” . . . .