In 1988, the National Park Service and Center for Archaeological Studies at Boston University were asked by the Lowell Historic Preservation Commission to investigate the grounds of the former Boott Mills boarding houses off French Street (one remains today, known as the Patrick J. Mogan Cultural Center), and the Kirk Street Agents House, former home for managers of the Boott and Massachusetts Mills (now the administrative headquarters of Lowell National Historical Park). The boarding houses stood on the site of today’s Boarding House Park. In 1988, the plot of land was a paved parking lot. That’s where the study-team dug—as well as across the street in the rear of the Agents House. The findings of the archaeological dig were published as Living on the Boott by Stephen A. Mrozowski, Grace H. Ziesing, and Mary C. Beaudry (University of Massachusetts Press, 1996). Following is an excerpt. — PM

“. . . A total of 7,183 ceramic fragments, accounting for a minimum of 305 individual dishes, were excavated from the backyards of Boott units #45, the boarding house, and #48, the tenement. Of these dishes, almost 75 percent were made of an inexpensive and utilitarian material called whiteware. More than a third  of these dishes were completely undecorated. Apparently, the boarding house table was set mostly with plain white dishes.

“The impression of stark table settings was reinforced by other aspects of ceramic analysis. Of the ceramic fragments that were decorated, none of the patterns matched any other except in color, suggesting that little effort was made to obtain matched sets. Apparently, the motivating force behind tableware choice was cost.

“The inexpensive, mismatched dinnerware bespoke a quiet humility, but mealtimes were probably lively, filled with the talk of work, talk of family, and talk of leisure time. In contrast, the table at the agents’ house was set with matching plates, saucers, and serving platters, colorful and attractive dishes with transfer-printed scenes of exotic ruins and foreign locales. Fine glassware and silverplate must have been carefully laid out by servants. Here, the family and its guests were waited on and served. . . .” 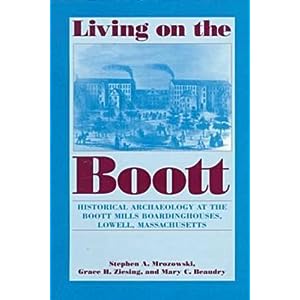