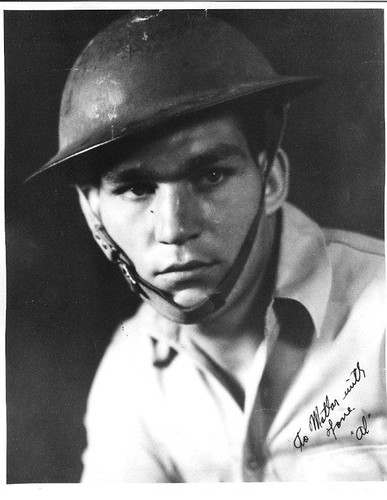 In recognition of Pearl Harbor Day, Tom O’Brien shared the following information about his late uncle, Alfred Francis O’Brien (pictured above), who as a member of the US Army, was stationed at Hawaii on December 7, 1941.

In memory of Pearl Harbor, I am sending you this picture of my late Uncle, Alfred Francis O’Brien who was at Pearl Harbor on that Day of Infamy. He went on after Pearl to fight on Guadalcanal. 25th Div, 35th Regt and if I remember correctly 1st Bat. C co. (Tropic Lighting). Before his death he told me exactly what it was like that day and what he did. . . When the 35th Reg went to to relieve the Marines on Guadalcanal he was one of those that went ahead and fought for a week with Carlson Raiders. A fact that the late Mr. Dodge of Lowell, who was with Carson’s Raiders remembered well. This picture was taken when he was on Pearl and was sent to his mother (my Grandmother). Sadly, he is now gone as is my father in law Joe Ustick, 1st Div, ( Omaha Beach ) my own father Tom O’Brien is having some issues ( 5th Army Air Corps, New Guinea). In a few more years the last of Americas Greatest Generation will be no more. So if any of you know an old WW 2 vet, please say Thank You because they were true Heroes because they in fact saved Freedom.