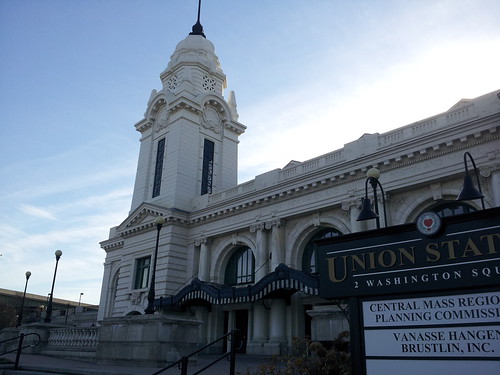 If you’ve ever driven through Worcester while heading west on Rte 290, you may have noticed the two white towers of the city’s train station just to the right of the highway. Union Station was constructed in 1911 and abandoned in 1975. In 2000, however, the city poured $32 million into the facility which emerged as a beautiful civic landmark. Since then, millions more have been invested on a bus terminal and a 500 car parking garage. Yesterday I visited Union Station for the first time to attend a luncheon for the five registers of deeds around the state who will be ending their elected terms this coming January (there are 21 registries of deeds in Massachusetts). Traffic was light so I arrived early and sat in the train station waiting room. While there, the MBTA commuter train from Boston arrived, discharging a dozen or so passengers. Others arrived with large suitcases which they checked at the Amtrak window. Destination? Chicago, on the Lakeshore Limited. For all its grandeur, however, the volume of activity at Union Station never came close to what I regularly see at Lowell’s Gallagher Terminal. While that facility could use some retail beyond the micro-Dunkin Donuts it now houses, it is highly functional and probably was a lot cheaper to build and maintain. Still, when you look at the below photo of the interior of Worcester’s Union Station, you can’t help but be a little envious. 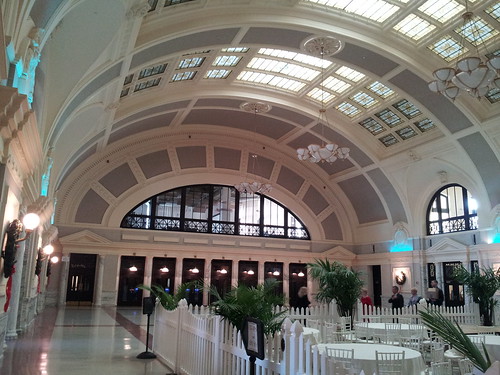 One Response to Union Station – Worcester