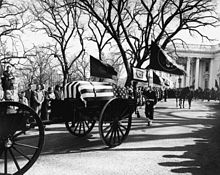 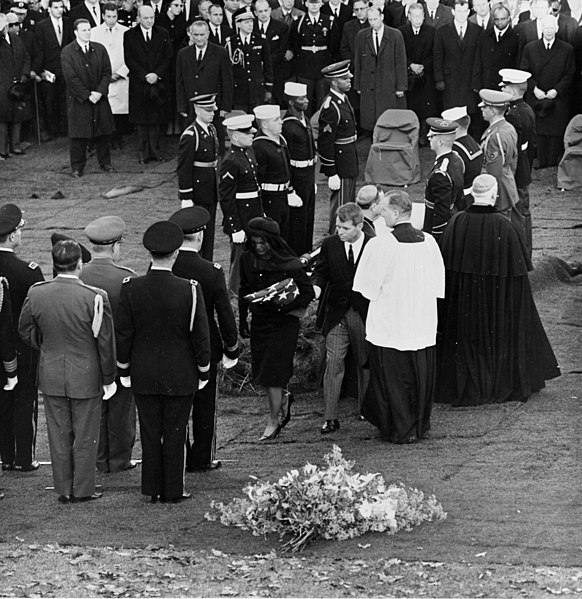 I am among those millions of Americans who can never forget where they were or what they were doing when they heard that President John F. Kennedy was shot and killed by Lee Harvey Oswald in Dallas, Texas, on November 22, 1963. I was a senior at Lowell State College having just completed my last day of student teaching at Bedford High School. Passing through the annex of Pollard’s Department store on my way to shop downtown, I was stunned to hear the news bulletin on a nearby television set that the President had been shot! Everything seems to stop. Our family in a state of shock and pain shed tears, said prayers and – except for attending Sunday Mass – stayed fixed before the television set.  History played out before us.

From the BBC – this day in history:

The funeral of the assassinated President, John F Kennedy, has taken place in Washington.

An estimated 800,000 Americans lined the streets to watch the coffin’s procession from the Capitol, where the president’s body had lain in state since yesterday.

The crowd stood in silence, punctuated only by the sound of weeping, as the funeral procession made its way towards St Matthew’s Cathedral in central Washington.

The coffin, draped with the Stars and Stripes, lay on a gun carriage drawn by six grey horses. A black riderless horse pranced along behind.

Mr Kennedy’s widow, Jacqueline Kennedy, and her two children, three-year-old John Kennedy junior, and five-year-old Caroline, rode behind in a black car, accompanied by his brothers, Robert and Edward.

Then came the long procession of guests, representing every continent in the world in one of the most distinguished gathering of foreign dignitaries ever assembled in the history of the United States.

They included, for Britain, the Duke of Edinburgh, the Prime Minister, Sir Alec Douglas-Home, and the Leader of the Opposition, Harold Wilson.

President de Gaulle of France was among them, as was President de Valera of Ireland, Chancellor Erhard of West Germany, and the Ethiopian Emperor, Haile Selassie.

Also among the mourners, in a poignant recognition of the dead president’s efforts to foster peace around the world, was the Soviet first deputy Prime Minister, Anastas Mikoyan, representing Nikolai Khrushchev.

The requiem mass at St Matthew’s was led by Cardinal Cushing of Boston.

It included a reading of the entire inaugural address, delivered by John F Kennedy in January 1961, with perhaps his most famous words: “Ask not what your country can do for you – ask what you can do for your country.”

As the coffin left the church after the ceremony, three-year-old John Kennedy Junior was seen to step forward for a moment and put his hand to his forehead in what appeared to be a childish salute.

The president was buried in Arlington Cemetery to a 21-gun salute and three musket volleys.

As a bugle sounded the Last Post, the remains of John F Kennedy were lowered into the grave.

The time was 2034 GMT, and the short but momentous era of America’s youngest elected president was over.