The Arts editor of the Boston Globe decided that the Revolving Museum of Lowell deserved a close look as it closed its doors this summer. Read the article here.

I was on the advisory committee of the Revolving Museum, not the board of directors but an advisory committee, for several years after Jerry Beck moved his cultural organization to Lowell. At the start, Jerry gave the city an injection of creative energy, enthusiasm, and ambition that did the community a lot of good. Every time a new show opened at the corner of Shattuck and Middle streets, the building was packed with people of all ages, ethnicities, races, economic levels, and other differences. Audience diversity was a hallmark of the Revolving Museum during its Lowell phase. I wasn’t in Boston for the early years, but I know what I saw in Lowell. For Jerry, there is an artist inside every one of us—and art is wherever you find it, however you see it as long as you are applying imagination and intelligence to what is being perceived.

You can read the Globe article for the complicated path down which the Museum, Jerry, and his family traveled in Lowelltown. How it looks depends on where you are standing, as the cliche goes. I’m not going to rehash or debate the details. When they brought us the Revolving Museum, City Manager John Cox along with planners Matt Coggins and Colin McNiece “moved the chains,” as Tom Brady might say, in Lowell’s results-producing effort to become the cultural hub in our part of the state. In a few days the Mass. Cultural Council leaders and others will be in Lowell for an announcement about an official cultural district in the city. From the Revolving Museum to Western Avenue Studios and 119 Gallery, Lowell has leaped forward as a visual arts hotspot since 2002. On Folk Festival weekend, festival-goers could see contemporary art at Zeitgeist, UnCharted, Arts League of Lowell, Art in the Courtyard at Market Mills, the Brush Gallery and the Parker Gallery at the Whistler House, and in the Eyeful Beauty hair salon on Middle Street. Recently, someone told me there are about 500 self-identified artists in the city, either living here or working in studios.

Hundreds of young people were empowered in their expressiveness by the TRM staff, principally Diana Coluntino, who was the institutional thread during the Lowell years. George Duncan of the Enterprise Bank turned a downtown fence into an evolving easel on Merrimack Street by trusting the creative impulses of TRM. Kudos, too, are in order for the Theodore Edson Parker Foundation directors who invested in the vision with grants that made things go for a while. We had the “big head” for a long time in the garden on Middle Street, a provocative and sometimes daffy counterpart to the silhouetted big head of Francis Cabot Lowell at Boarding House Park. We had the tape monster on Shattuck Street during the Lowell Folk Festival in the mid-2000s. We had Artbotics with scientists and artists from UMass Lowell working with kids to design robots; the National Science Foundation thought this was cool. We had Renovation Journal camped out in the cellar of TRM annex on Market St.

In the end, was it the right fit for Lowell? Think of the effort as part of the city’s research-and-development on its way to redefining itself for the 21st century. How many rockets came back to Earth before we landed two astronauts on the moon? Some of these early rockets didn’t make it off the launching pad. The Revolving Museum at least got into orbit here for a while. 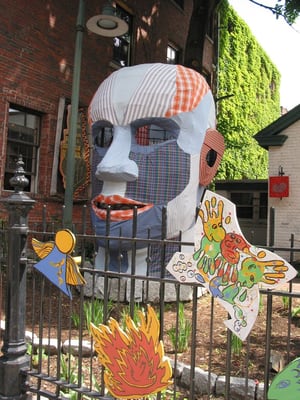