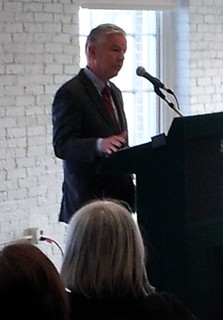 More than 100 people gathered at the Tsongas Industrial History Center at the Boott Cotton Mills Museum earlier this evening for the opening reception for “Dickens and Massachusetts” which commemorates his 1842 visit to Massachusetts which included a day in Lowell which made a deep impression on the famous English writer. The exhibit, which is set up in the first floor exhibit space of the Boott Museum, will be open from 10 am until 4 pm, seven days per week through October. Be sure to visit it – often. Tonight’s festivities also kick-off seven months of lectures, demonstrations, walking tours and all manner of activities – 75 in all – that will take place around Lowell between now and October.

Tonight’s program opened with UMass Lowell Chancellor Marty Meehan (shown above) thanking the various institutions that partnered with UML to make this exhibit a reality including the Lowell National Historical Park, the Tsongas Industrial History Center, Worcester Polytechnic Institute (WPI has a world-class collection of Dickensian artifacts – who knew?) and the Charles Dickens Museum of London. The National Park’s David Blackburn, who co-curated the exhibit and served as master of ceremonies tonight, next introduced his co-curator, UMass Lowell professor Dianna Archibald who thanked all who were involved in the creation of the exhibit. She said that the final days of actually setting up the exhibit made it feel like Dickens had returned to Lowell and that for a scholar who had devoted so much time to studying Dickens, being around so many artifacts from his life was a very special experience. She said the best place in the world to do an exhibit was at the Lowell National Historical Park.

Next to speak was Dr. Florian Schweizer, the executive director of the Charles Dickens Museum of London (shown below). Dr. Schweizer said that this exhibit shows how Dickens influenced America and America him. Schweizer acknowledged that much of the attention on Dickens writings about America were on some of the negativity expressed by the writer but that the time has come for us to re-evaluate the relationship between Dickens and Massachusetts and that this exhibit and all of its ancillary programming will hopefully be the start of such a re-examination. 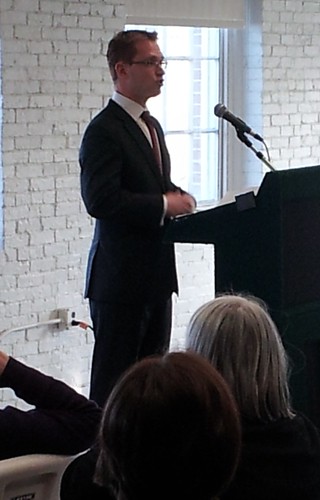