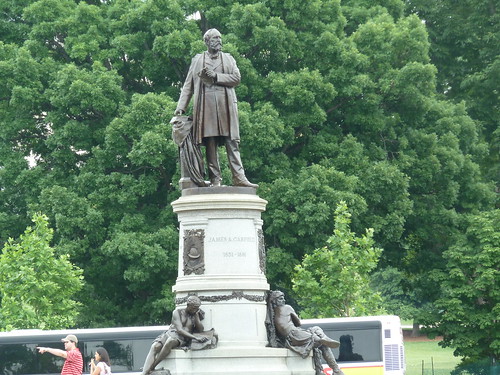 As you approach the Capitol from the National Mall in Washington, there’s a large statue of General Ulysses S Grant on horseback flanked by dramatic sculptures of two horse artillery sections going into action. But off to the right, at the southwest corner of the Capitol grounds, is another large statue, not of a soldier but of a statesman. That statue (shown above) is of James Garfield. It begs the question why did someone who spent just 200 days as president warrant such a prominent monument.

“Destiny of the Republic: A Tale of Madness, Medicine and the Murder of a President” by Candice Millard helps answer that question. Garfield was born into abject poverty in Ohio in 1831 but through hard work and perseverance, he gained an education and an outstanding character. In the Civil War, he served as an officer, saw combat, and rapidly rose to the rank of general of volunteers. Because of his popularity, he was elected to Congress in 1862 and, contrary to his own desire to remain in the military, he left the service and headed for Washington at the express request of President Abraham Lincoln who needed the votes in Congress.

Garfield had been elected to nine consecutive terms when at a deeply divided Republican convention in 1880 at which he was scheduled to give a nominating speech for Ohio Senator John Sherman, the party chose him to be its candidate for president over his own strong objections. Garfield went on to defeat the Democratic nominee, former Union General Winfield Scott Hancock.

Because of Garfield’s reputation of even-handedness and integrity, there was great hope that his presidency would help heal many of the lingering wounds from the Civil War. But much of Garfield’s time was taken up by office and favor seekers who arrived each day at the White House, which was neither locked nor guarded. One of the most persistent was a mentally disturbed lawyer named Charles Guiteau who believed he had played a significant role in Garfield’s election and expected to be rewarded accordingly. After several months of being ignored, Guiteau realized that his best hope of obtaining an ambassadorship or some like reward would be for Vice President Chester Arthur to become President. To make that happen, Guiteau decided to kill President Garfield.

The attack occurred on July 2, 1881 as Garfield walked through the Potomac and Baltimore train station bound for a train that would reunite the 49-year old president with his wife and children who were vacationing on the Jersey Shore. Guiteau came up behind the President and fired two shots: one pierced his arm but the other went into his back, lodging behind the pancreas.

Through the rest of the book the author makes a rather compelling case that Garfield’s wound was completely survivable had he been simply left alone. But a squad of doctors descended on the wounded President and each sought to locate the bullet using unsterilized instruments and fingers as was the practice at the time. The author contends that these post-shooting events introduced large amounts of bacteria into Garfield’s body which led to an overwhelming infection that killed him nearly three months after the shooting.

Sadly, the need for sterilization in treating wounds was not a foreign concept – or rather it was a foreign concept because it had been developed in England by Joseph Lister. The “antisepsis” techniques developed by Lister were so successful, that they had become the state of the art in Europe by the time of Garfield’s shooting. Lister had actually come to America in four years before Garfield’s shooting to lecture on his techniques, but his audience of the most prominent doctors in America dismissed his theories, arguing that something that you couldn’t even see (bacteria) could pose no threat. When Garfield’s autopsy revealed that he died of a massive infection, the stalwarts of the American medical profession were severely discredited and younger, more progressive doctors had an easier time implementing Lister’s techniques.

You would think that one other thing that Garfield’s death might change was the way we failed to protect our presidents. The author contends here that Americans saw the problem not as potential assassins but as a man driven mad by his quest for appointed office. Garfield’s death, therefore, was a major factor in a wave of governmental reforms the began reducing (but certainly not eliminating) the role patronage played in the operation of the American national government.

One Response to “Destiny of the Republic” book review