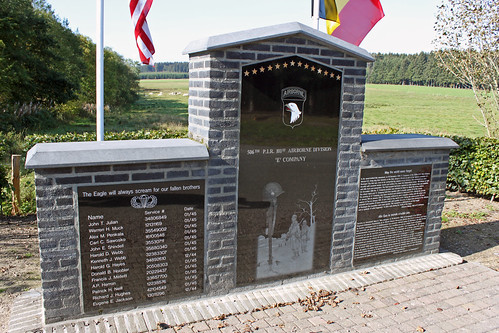 Sixty-seven years ago today, early in the morning of December 16, 1944, a half million German soldiers achieved complete surprise by attacking the thinly held American lines along the Belgium-Luxembourg border. By the time it was over weeks later, 80,000 American soldiers had been killed, wounded or captured. In his epic book, “A Time for Trumpets: The Untold Story of the Battle of the Bulge,” Historian Charles B MacDonald, who fought in the battle as a 20-year old rifle company commander, called the Battle of the Bulge “the greatest battle ever fought by the United States Army.” He also called it “one of the most egregious failures in the history of American battlefield intelligence.”

Much of the attention given to the Battle of the Bulge recently is a result of the 2001 HBO miniseries “Band of Brothers” which depicted the real-world experiences of Easy Company, 2nd Battalion, 506th Parachute Infantry of the 101st Airborne Division. When the German attack began, the 101st was in a rest area in the rear and immediately became the strategic reserve of the US Army Europe. Rushed to the critical crossroads town of Bastogne, the 101st soon found itself surrounded as the Germans by-passed the town and continued on towards their objective. The 101st held Bastogne throughout, however, severely disrupting the Germans ability to reinforce their initial breakthrough. A portion of the Band of Brothers episode from the Bastogne engagement is in the video below and the photograph above, of a monument near Bizory at the edge of the Bois Jacques, is exactly where Easy Company fought in the action shown in the video. (The photo was taken by my friend Dave Dionne who recently visited the Belgian battlefield).

But the 101st Airborne was only one of the American units involved. By the time the Battle of the Bulge was over in mid-January, more than 600,000 US soldiers were engaged in the fight. Critical to the ultimate American victory were the actions of the units on the “shoulders” of the breakthrough. Rather than retreat, they held their positions and eventually counterattacked into the “bulge” in an effort to cut off the German armies that had made the attack. One of the units on the northern shoulder of the breakthrough was the US 1st Infantry Division. My wife’s father, Joseph Chabot, was a sergeant assigned to the 1st ID’s medical battalion. He was with the division when it landed in North Africa in 1942, in Sicily in 1943, and in Normandy in 1944. And he was there in Belgium in December 1944. He survived the war but he died young, when Roxane was only 1 year old, so she never had the chance to talk to him about his experiences during the war. Some of his letters did survive though. Here’s an excerpt from one dated “January 9, 1945 – Belgium”

I made a mistake by not asking for felt shoes when I wrote in September for what I wanted. I realized that yesterday when I went on a long trip in an open jeep. It was the coldest ride I’ve had in years. It’s too late now because if I was to ask for a pair now I’d get them sometime during the end of spring . . .

. . . Christmas and New Years didn’t mean much to us this time because we were in combat and felt pretty low. The Germans should have waited for a month or so for their counter-attack.