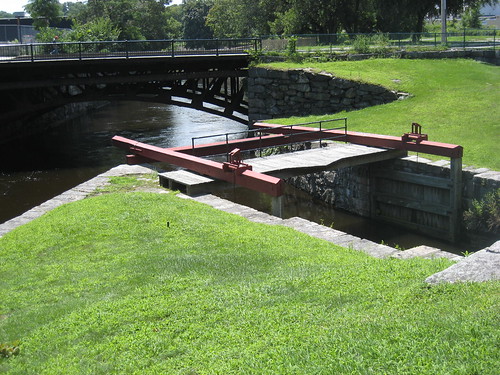 The following is the first of a series of posts about the history of the canals of Lowell.

Throughout the 18th century, world demand for lumber from the upper Merrimack River continued to grow. By the end of the American Revolution, lumbermen would routinely cut down trees along the river banks, bind the logs into rafts, and float them down the river to Newburyport’s markets and the Atlantic Ocean. The passage of the Pawtucket Falls at East Chelmsford was treacherous for the rafts, however, and so for many years people had considered the benefits that a canal that circumvented the falls would bring. In 1792, Dudley Tyng, William Coombs and others formed a corporation called “The Proprietors of the Locks and Canals on the Merrimack River” and proceeded to dig a canal. Sweeping in a great arc from the banks of the Merrimack above the falls to the Concord River near its confluence with the Merrimack, the Pawtucket Canal took five years and cost $50,000 to construct. The canal was one and one-half miles long and used four locks to accommodate the 32 foot difference in elevation between the upper Merrimack and the Concord. One of the four locks was eventually deconstructed leaving the three we have today: The Guard Locks near Broadway – shown above – which are co-located with the Francis Gate; the Swamp Locks off Dutton Street – shown below – and the Lower Locks which are right next to the UMass Lowell Inn & Conference Center which is where the Pawtucket Canal enters the Concord River. The Pawtucket Canal commenced operations in 1797, but it proved to be unprofitable once the competing Middlesex Canal opened the following year. 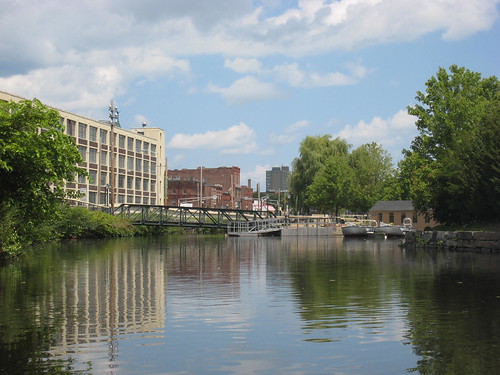 2 Responses to The Pawtucket Canal