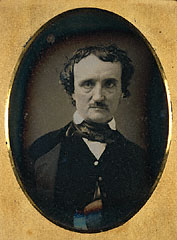 On this day – October 7, 1849 – American author, poet, editor and literary critic – Boston-born Edgar Allan Poe died at age 40 in Baltimore. His tales include: “The Tell-Tale Heart” and “The Pit and the Pendulum” – his poems include “The Raven” – “Anaabel Lee” – “The Bells” and “Ulalume.” Poe visited Lowell, Massachusetts in the Spring before he died to lecture on American poetry.

Regarding Poe, Lowell, Massachusetts and this  daguerreotype from the J Paul Getty Museum web site:

Many of Edgar Allan Poe’s contemporaries described him as he appears in this portrait: a darkly handsome and intelligent man who possessed an unorthodox personality. Despite being acknowledged as one of America’s greatest writers of poetry and short stories, Poe’s life remains shrouded in mystery, with conflicting accounts about poverty, alcoholism, drug use, and the circumstances of his death in 1849.

This daguerreotype was made several months before Poe’s death at age 40. After his wife died two years earlier, Poe met Annie Richmond at a poetry lecture that he gave when visiting Lowell, Massachusetts. Although she was married, they developed a deep, mutual affection. Richmond is thought to have arranged and paid for this portrait sitting. Poe is so forcibly portrayed that historians have described his appearance as disheveled, brooding, exhausted, haunted, and melancholic.

Like his life, Poe’s poems and short stories are infused with a sense of tragedy and mystery. Among his best-known works are: The Raven , Annabel Lee , and The Fall of the House of Usher .

For more on the life and career of Edgar Allan Poe link here to Wikipedia.