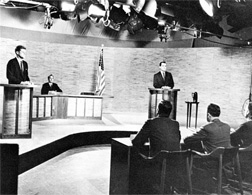 History.com reminds us that on this day September 26, 1960, the first televised debate between presidential candidates took place in the city of  Chicago. Presidential hopefuls Republican Richard M. Nixon and Democrat John F. Kennedy squared off in a television studio to discuss “domestic matters.”

Kennedy emerged the apparent winner from this first of four televised debates, partly owing to his greater ease before the camera than Nixon, who, unlike Kennedy, seemed nervous and declined to wear makeup. Nixon fared better in the second and third debates, and on October 21 the candidates met to discuss foreign affairs in their fourth and final debate. Less than three weeks later, on November 8, Kennedy won 49.7 percent of the popular vote in one of the closest presidential elections in U.S. history, surpassing by a fraction the 49.6 percent received by his Republican opponent.

One Response to First Televised Presidential Debate: Kennedy vs Nixon