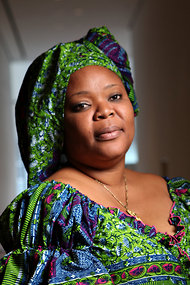 Page one of “The Arts” in today’s New York Times includes Julie Bosman’s article about the upcoming book tour by Liberian peace activist Leymah Gbowee, the 2011 UMass Lowell Greeley Scholar for Peace Studies who was in residence for three weeks last April. Leymah led a women’s movement that forced an end to a long civil war in Liberia in 2003. Titled “Mighty Be Our Powers,” the book is published by Beast Books, whose chief editor is Tina Brown of the Newsweek Daily Beast Company. The story is also told in the film “Pray the Devil Back to Hell,” which was shown here during Leymah’s visit. Her eight-city book tour is being funded by Barnes & Noble chairman Leonard Riggio. Read the article here, and get the Times on your porch or online if you want more.