On her third visit to the Lowell Summer Music Series, Liz Longley appeared to be very comfortable in front of a Lowell crowd. She’s probably at ease on any stage after doing 150 gigs a year while in college. She recently graduated from Berklee School of Music in Boston, a songwriting major who opened for Livingston Taylor the last time he was at Boarding House Park. She has an endearing presence, almost too sincere to believe as she sets up and then delivers break-up songs about bad boyfriends. Moving from guitar to electric piano she offered a song about her grandmother with Alzheimer’s disease. She switched back to guitar and reached a peak with “an angry song” about a young man and his Camaro, the “red-hot” new thing. Series M.C. John Marciano didn’t let her get away without an encore of “Dough for Dough,” a rap song by an admittedly awkward white girl from Pennsylvania who likes Girl Scout cookies too much. It was a funny and clever number spit out with attitude. She’s moving to Nashville in November to pursue stardom, I guess, but she promised to be back in Boston in late winter.

At about 8.30 p.m., Richard Thompson walked on stage to wild applause from the packed house at the John Street pavilion. Behind him, the illuminated, well-crafted Boott Mills clock-and-bell tower, tall smokestack, and curved, lit brick stair-tower made a composition fit for a postage stamp if Lowell’s National Park ever gets commemorated that way. Thompson is a veteran musician whom Rolling Stone magazine ranks as number 20 in the top 100 guitarists, according to Series overseer Peter Aucella. He certainly showed it on “1952 Vincent Black Lightning” and “Crawl Back (Under My Stone).” The virtuoso player filled the park with sound, coaxing gorgeous notes out of his acoustic guitar. The chords rang and chimed, and many a song ended with a sharp strum. I’m always amazed at how a real pro singer-player can saturate a big space with a voice and strings. I remember how McCartney filled Fenway to aural capacity singing “Something” and accompanying himself with a ukelele one summer night two years ago.

Richard Thompson was a bigger presence than I expected. I had heard of his work with Linda Thompson and knew of the Fairport Convention, but he was somebody not on my radar screen. By the second song tonight, I understood the attraction. He’s not a young guy, but retains a powerful voice. He’s an appealing presence with the right amount of between-song patter and witty asides. He’s played Boarding House before, so he thanked the organizers for the return invitation—even after the scandal thing, he joked. Superb musicianship has been a hallmark of the summer series this year. It’s always an entertaining line-up, but each year the musicianship seems to step up a notch. Chris Isaak, Bela Fleck and the Flecktones, the Fab Faux, the Court Yard Hounds, moe., Rickie Lee Jones, Great Big Sea, and the rest kept the bar very high. 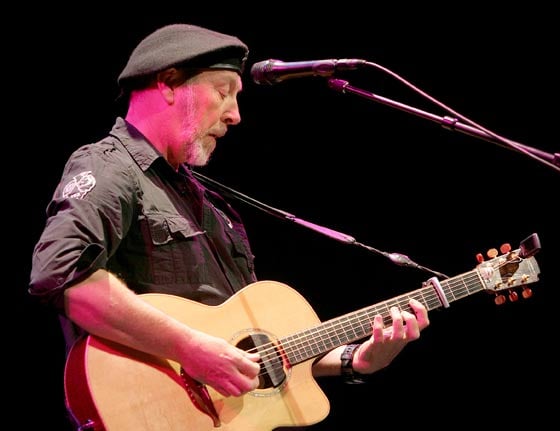