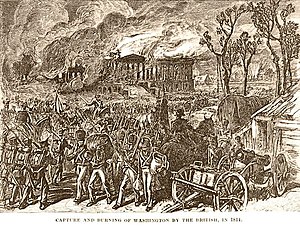 On this day August 24, 1814 British forces invaded Washington, D.C. and set fire to the Capitol and the White House. Most members of Congress and other officials fled from DC when they got word that British forces under General Robert Ross overwhelmed American militiamen at the Battle of Bladensburg, Maryland and were marching unopposed into Washington, D.C. Not so for President Madison and his wife Dolly – they escaped just before the invaders arrived.

The British army entered Washington in the late afternoon, and General Ross and British officers dined that night at the deserted White House. Meanwhile, the British troops, ecstatic that they had captured their enemy’s capital, began setting the city aflame in revenge for the burning of Canadian government buildings by U.S. troops earlier in the war. The White House, a number of federal buildings, and several private homes were destroyed. The still uncompleted Capitol building was also set on fire, and the House of Representatives and the Library of Congress were gutted before a torrential downpour doused the flames.

On August 26, General Ross, realizing his untenable hold on the capital area, ordered a withdrawal from Washington. The next day, President Madison returned to a smoking and charred Washington and vowed to rebuild the city. James Hoban, the original architect of the White House, completed reconstruction of the executive mansion in 1817.

Read more about this 1814 event and the restoration of the White House here. at the whitehousemuseum.com.