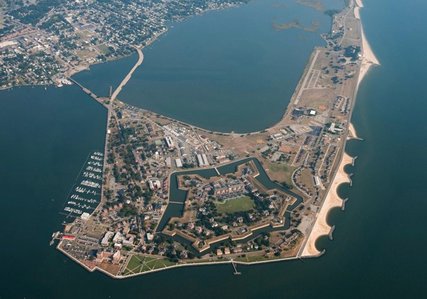 Fort Monroe today, with the city of Hampton, Va., beyond it. The star-shaped citadel is the Civil War-era fortress.

The Sesquicentennial Remembrance of the American Civil War has engendered a tremendous groundswell of grass roots preservation activism. Many of these activists are hoping to see a new role for historically important Fort Monroe. So important as to “deserve a place alongside Plymouth Rock and Gettysburg in the pantheon of America’s historic places.” It is located in the Virginia harbor known as Hampton Roads. Next month Munroe will be deaccessioned by the Army under the terms of the federal Base Realignment and Closure Act of 2005. Its future beyond that point is in the hands of President Obama, who is deliberating whether to use his executive powers that he holds under the Antiquities Act of 1906 to declare the citadel a national monument. It would be the first such act of his presidency.

Adam Goodheart – the author of “1861: The Civil War Awakening” – writes about why he thinks preserving Fort Munroe is a must:

There are few places in America where the full sweep of our nation’s past — from tragedy to triumph — are more palpable and immediate than on this small, fishhook-shaped spit of land near the mouth of the Chesapeake Bay. Fort Monroe, Va., stands where African-American slavery began — and also, in a sense, where it ended. It marks the birthplace of black America, and the place of its rebirth into freedom.

In 1619, the first shipload of captive Africans arrived at this spot, which was then an outpost of the Jamestown colony. By a remarkable coincidence, it is also where, in the spring and summer of 1861, slavery received its deathblow, as the first black fugitives of the Civil War began pouring into Union lines, a small trickle that soon became a mighty river. (I told this story in greater detail in an article in The New York Times Magazine in April.) Their bold escape, perhaps even more than Abraham Lincoln’s Emancipation Proclamation more than a year later, was responsible for slavery’s extinction.

On a more local note: It was here at Fort Munroe that Union Gen. Benjamin F. Butler of Lowell declared three fugitive slaves “contraband of war” classifying them as captured goods being used for military purposes by the enemy and thus subject to legitimate seizure.This declaration was a significant event in the Civil War. Lowell Civil War historian Dick Howe has lectured extensively about the importance of Butler’s declaration.

Company H of the 4th Massachusetts Volunteers were among the critical Union reinforcements who arrived at Fort Monroe on April 20, 1861.