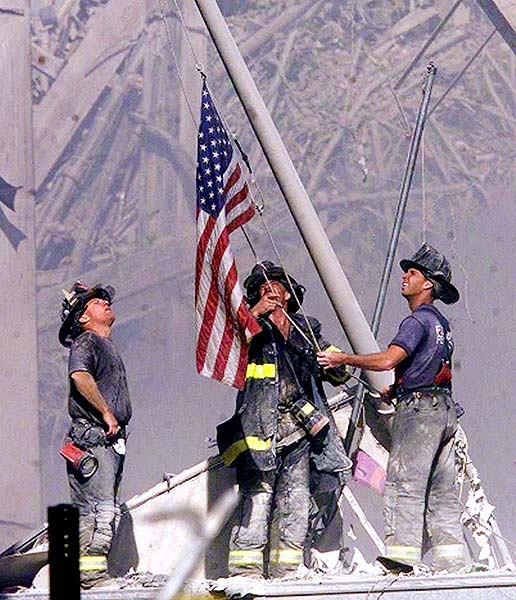 The office of Lowell Mayor James Milinazzo issued a press release today announcing the commemoration and remembrance of the tenth anniversary of the September 11th with a ceremony at City Hall on Friday September 9, 2011. This flag raising will be a remembrance ceremony held by City of Lowell with Community Teamwork, Inc. Senior Corps programs. Seniors as part of their service commitment for that day will be collected supplies that have been requested for local veterans in need.

COMMEMORATING THE 10TH ANNIVERSARY OF SEPTEMBER 11TH
NATIONAL DAY OF SERVICE AND REMEMBRANCE
TO BE HELD AT LOWELL CITY HALL
The City of Lowell and Community Teamwork, Inc. Senior Corps Volunteer Program join forces to embrace the impact from that day.

Lowell, MA – On September 11, 2001 our nation will never forget as we watched the World Trade Center towers fall, the Pentagon crumble, the hundreds of New York firefighters die trying to rescue those trapped, and the pride and admiration for those passengers who forced a plane down in a Pennsylvania field, knowing their lives would end at that moment.

Please join Mayor Jim Milinazzo, his colleagues in Government, city employees and city partners in paying tribute and honoring those lost and injured on September 11th and the many who gave of themselves in service to their communities and to this country through the outpouring of spirit, pride, selflessness, generosity, courage and service. The City of Lowell and Community Teamwork, Inc. Senior Corps programs will commemorate the 10th Anniversary of September 11th at a flag raising ceremony on Friday, September 9th. The observance, which nationally recognizes the impact of terrorism on surviving family members and friends, will begin at 10:00AM at City Hall.

Also, as a small way of thanking those whose lives have been changed forever by the service they gave, CTI’s Senior Corps programs are partnering with local Senior Centers to collect supplies that have been requested by local area veterans’ services. All items will be donated to benefit local veterans who are struggling; Crescent and Princeton House, both Lowell. For a list of items needed, please visit or inquire with your local Sr. Center or the Lowell Mayor’s Office.

“We will never forget what happened on September11, 2001, and we will forever honor those whose lives were taken from this great nation” said Mayor Jim Milinazzo.

In honoring our local men and women in uniform, the flag raising event will include Lowell High School JROTC Color Guard, Lowell High School Spindle Show Choir and our own Lowell Police and Fire Chiefs and first responders; concluded by “God Bless America”.