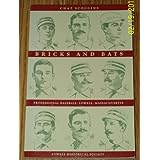 Chaz Scoggins is veteran sports writer for the Lowell Sun having joined the staff in 1970. Sports writing especially covering the Red Sox and baseball in general for Scoggins seems greatly influenced by that history degree he received from Harvard. Going way beyond the “call” of a game, he seems to relish the whys and wherefores rooted in the history and evolution of baseball. Stats seems part of his writers’ ink. Scoggins is the author of two books – one “Bricks and Bats. Professional Baseball: Lowell, Massachusetts” published in 2002 by the Lowell Historical Society and the second “Game of My Life: Memorable Stories of Boston Red Sox Baseball” published in 2006.

An author’s notes tells us a bit about Chaz Scoggins:

Chaz Scoggins began working at The Lowell Sun in Massachusetts after graduating from the University of Massachusetts-Lowell in 1970 with a history degree. The award-winning writer has been covering the Boston Red Sox for The Sun since 1973. He served 14 years as chairman of the Boston chapter of the Baseball Writers Association of America and was national president of the BBWAA in 2000. Scoggins has been the chief official scorer at Fenway Park since 1978 and has been an official scorer at three All-Star games and three World Series. He has also broadcast Lowell Spinners games in the Class-A New York-Penn League on radio from 1997-2002, and began doing so again in 2005. This is his second book. He previously authored Bricks and Bats, about the history of minor-league baseball in Lowell. Scoggins lives in Lowell with his wife, Victoria.

In today’s Lowell Sun Scoggins writes about a team that long pre-dates the Lowell Spinners in capturing the loyal support of local lovers of the game. The Lowell Grays formerly the Lowell Tigers went from pathetic to outstanding in 1911 – winning the New England Championship. While stats are important, it is the personal stories of those who played, coached, managed and financed the team that give texture to Scoggins tales in the Sun article and in “Bricks and Bats….” The names might ring a bell to oldsters and students of Lowell baseball – Bill Merritt, Fred Lake, Lefty Tyler, Cuke Barrows and owner Andy Roach. Of course, today’s article is also about the “new baseball” which went from a rubber center to cork-centered to really liven up the game as its use became more common.

Read Scoggins story on-line here or in hard copy in the Sports section of today’s Lowell Sun – page 23. If your interest is piqued about the history of professional baseball in Lowell then check out “Bricks and Bats. Professional Baseball: Lowell, Massachusetts” available from the Lowell Historical Society here – http://www.lowellhistoricalsociety.org/sales.htm.