Phil Levine was one of my poet-heroes when I started writing in the mid-1970s. I admired his ability to be literary and intellectually serious in his compositions while gripping firmly his working-class roots. He made poetry out of a world that was familiar to me and very American. I have many of his books, but one is special because he signed it for me and added the words “With hope for poetry.”

He’s from Detroit, which seems to be having some kind of moment. The car-makers are off life-support, the city got showcased in the cool and smooth “Imported from Detroit” TV ads that premiered on the Super Bowl broadcast, and now the Poet Laureate is from Detroit. Maybe we can lure him to Lowell to follow up the appearance of Poet Laureate Kay Ryan at UMass Lowell last April. Detroit is not out of the economic woods, but the attitude appears to be improving. Levine taught at California State University at Fresno for most of his career.

Here’s a NYT link to samples of Levine’s poetry. 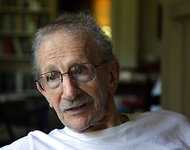 2 Responses to Philip Levine Is the New U.S. Poet Laureate