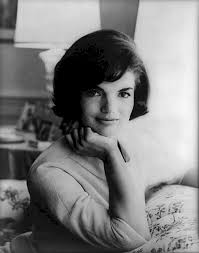 On this day in 1929, President John F. Kennedy’s beautiful and popular wife, Jacqueline Bouvier Kennedy, is born into a prominent New York family.

Jacqueline, or “Jackie” as she was called, grew up an avid horsewoman and reader. In 1951, after graduating from George Washington University, Jackie toured Europe with her sister. That fall, she returned to the U.S. to begin her first job as the Washington Times-Herald’s “Inquiring Camera Girl.” Her assignment was to roam the streets of Washington, D.C., asking strangers “man on the street” questions and then snapping their picture for publication. Shortly after her return to the capital, at a dinner party in Georgetown, she met a young, handsome senator from Massachusetts named John F. Kennedy. They dated over the next two years, and in May 1953, Kennedy proposed. Jackie accepted and the couple married on September 12, 1953, at St. Mary’s Church in Newport, Rhode Island. The Kennedys then settled in Washington, D.C., where Kennedy embarked on a meteoric political career. He served as a senator from Massachusetts from 1953 until he was elected president of the United States in 1961. At the time, he and Jackie were the youngest couple ever to reside in the White House…