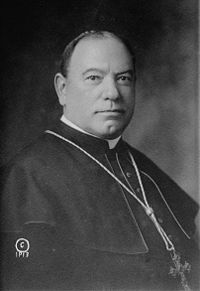 Mark Arsenault tells us in today’s Boston Globe that the dispute of long-standing between the Archdiocese of Boston and Boston College on one side and the family of William Cardinal O’Connell on the other – has been settled. Those following the lengthy dispute know that the Archdiocese and BC wanted to relocate O’Connell’s remains from the crypt beneath a small chapel on the land the school bought from the archdiocese in 2004 in order that the college could redevelop the property. O’Connell himself chose his place of burial and reinforced that choice in his 1943 will. With the settlement the family – that includes former U. S. Senator Paul Kirk – agreed that a spot on the grounds of St. John’s Seminary would fulfill the Cardinal’s wishes as Arsenault notes:

O’Connell had wanted to be entombed near the seminary because he thought a conspicuous shrine would lead the seminarians “to think at least once in a while of me,’’ the cardinal said in 1928, “and say a ‘De Profundis’ or an ‘Ave Maria’ for my eternal rest.’’

Of interest to Lowell and other locals: William Henry O’Connell was born the son of Irish immigrants in Lowell, Massachusetts on December 8, 1859. He graduated from Lowell High School as part of the Class of 1876. His life and service which greatly influenced the times and history of the American Catholic Church, the Boston Archdiocese and the Commonwealth are commemorated by a landscaped monument and fountain between Merrimack and Market Street in what is know as Cardinal O’Connell Parkway. A private anonymous benefactor has donated funded for recent and nearly completed upgrade of this site. O’Connell was raised to the College of Cardinals on November 27, 1911. Surely there will be a celebration of the 100th anniversary of his elevation – as the first Archbishop of Boston to be placed in the College of Cardinals. Stay tuned!

Read the details of the settlement here in the Globe article.