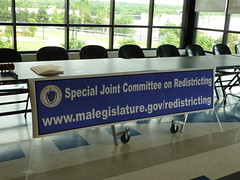 Perhaps lost or at least a bit below the radar is the reality that the job of the Joint Redistricting Committee is to review and possibly realign the state senate and state rep districts across the Commonwealth. It was evident at the hearing at Lawrence High School last Monday evening that at least six rep and one or two senate districts are hot topics for the committee.

The town fathers of Chelmsford take their goal to reduce the current number of reps with town precincts in their district from four to at least two or three but ideally in their view to one – very seriously. An officially-designated town redisticting committee has been working on this issue for months – and the committee’s voice was heard at the hearing – but not for the first time.

Another group or network of groups was heard from who had two threads of interest – making two minority rep districts for the city of Lawrence and a minority senate district for Lawrence, Methuen and Haverhill. The chief spokesperson for the network made it clear that all other “communities of interest” or “commonalities of interest” were of minor concern and of no priority. The basis of interests mentioned by other testifiers referred to history, culture, geography, economics, the poor/under-served and elected women in Congress and the State House and more. There is a clear difference in priorities for individual districts of whatever electoral designation.

The committee has legal, constitutional and constituent considerations as well as the threat of lawsuits dangling over its head. There is a timeline with the 2012 elections time bench-marks in the offing. Unlike the past, the transparency pledge seems genuine and clear. You can check out the committee’s website here to get more information or attend one the remaining hearings scheduled for June 18 at Framingham State University; June 20 at Lynn City Hall; June 27 at Cape Cod Community College.

One Response to More on Redistricting ~ Senate and Rep Districts Too!