Here’s the text of the famous 1884 Memorial Day speech by Oliver Wendell Holmes, Jr., the Boston-born Civil War veteran who served on the US Supreme Court.

His parents were the doctor-poet Oliver Wendell Holmes and abolitionist Amelia Lee Jackson. He enlisted in the army in his senior year at Harvard College.

Of Lowell note is that his best friend in college was Henry Livermore Abbott (1842-1864) of Lowell, a highly respected Union officer who was killed in the Battle of the Wilderness in Virginia in May 1864. He was posthumously promoted to Brigadier General at 22 years old. 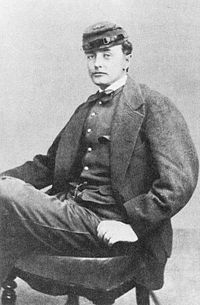