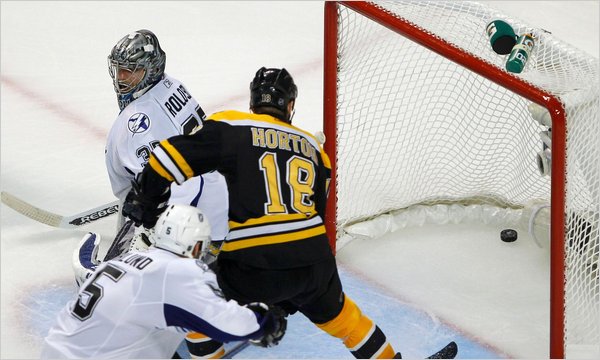 Boston is back in the Stanley Cup finals for the first time since 1990 for a chance to win it all for the first time since 1972, the Bobby Orr era. I was a senior in high school the last time the Bruins won the NHL championship. It’s been years since I could name more than two active players for the black-and-gold. My attention had drifted from the hockey game in Boston. I’ve liked Patrice Bergeron since he broke in several years ago. He’s the special talent at center, but there’s no real superstar other than Tim Thomas, kind of a surprise at 37 years old.

By now, local hockey fans know that Thomas “almost” attended UMass Lowell, but went to Vermont because Duane Roloson of the Lightning (Tampa Bay) was the starting goalie. Last night at the wildly successful Commencement Eve Gala, the Distinguished Alumni Award-winner John Kennedy recounted the lessons of Tim Thomas’s career: Don’t be sidetracked from your dream by temporary failure, and don’t shy away from a risk to reach your objective. Kennedy is a former Lowell Tech math major who became highly successful in business and is now a generous contributor to UMass Lowell. The Gala, by the way, raised $620,000 for student scholarships. Wicked impressive.

From 1970 and 1972 championship Bruins teams I can name and picture in my head the core players: Orr, Esposito, Cheevers, Sanderson, Bucyk, McKenzie, Westfall, Stanfield, Johnston, Awrey, Walton, Marcotte, Vadnais, O’Reilly, D. Smith, R. Smith, Doak, Carleton, Hodge, Cashman, Sather, Lorentz, Leach, Green, Bailey. I think I might remember some of the players from this team that will take on the Vancouver Canucks for the big prize.