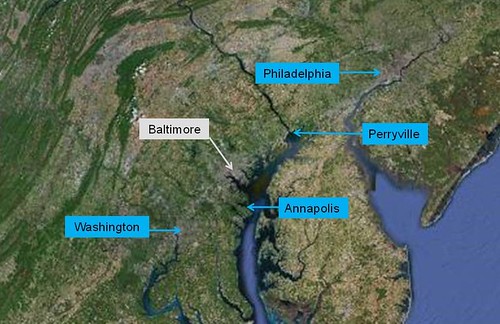 Many in Lowell know the story of the Sixth Massachusetts Volunteer Infantry Regiment and its involvement in the Baltimore Riot of April 19, 1861 that cost four soldiers (including Lowell’s Luther Ladd and Addison Whitney) their lives. Few realize that for a week following that incident, Washington DC was at great risk of capture by Confederate forces, a crisis that was resolved thanks mainly to the ingenuity and initiative of Lowell’s Ben Butler.

The reason the Sixth Regiment had fought so hard to get through Baltimore was that there were no organized and loyal military units in Washington when the war broke out. The Sixth did arrive late in the day on April 19th, but the riot earlier in the day had caused the Baltimore civic leaders to burn all of the railway bridges leading into the city from the north to prevent the passage of any more northern troops through the city. With Baltimore in the hands of pro-southern forces, Washington was cut off from the north. The western route into Washington had also been cut when Harpers Ferry was captured by Confederate forces on April 18, The southern route into the capital, up the Chesapeake Bay and then the Potomac River was also cut when the Confederates captured the Norfolk Naval Shipyard (then known as Gosport Navy Yard) and later placed cannon on the banks of the Potomac downriver from Washington. With Washington defended only by the Sixth Regiment, thousands of Confederates began massing in nearby Arlington and Alexandria.

Two more Northern regiments, the Eighth Massachusetts and the Seventh New York, were stuck in Philadelphia due to the rail line to Baltimore being cut. Accompanying the Eighth Regiment, however, was Ben Butler and he was not one to allow something like a couple of downed bridges keep him from saving Washington from the traitors. Butler devised a plan to bypass Baltimore. He led the Eighth Regiment by train to Perryville where it would normally have crossed the Susquehanna River by ferry and then continued by rail to Baltimore. This time, Butler confiscated the ferry and ordered it to sail down the Chesapeake Bay to Annapolis where another rail line ran to Washington. Butler arrived just as Confederate sympathizers were about to seize Annapolis. Using the Eighth Regiment, he was able to open this rail line. The military command in Washington ordered Butler to keep the Eighth Massachusetts in Annapolis to keep the rail line open at all costs. He did that and the Seventh New York, which followed close behind, passed through the Eighth and continued on to Washington where the entire city treated the New Yorkers as liberators. Within ten days, more than 10,000 Northern troops were in Washington and that crisis had passed, thanks to Ben Butler.