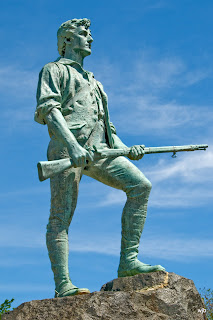 Yesterday I took a ride to Lexington, MA. I arrived shortly before the annual Patriot’s Day Parade and several hours after the re-enactment of the famous battle that took place on the Lexington Green on April 19, 1775, a battle recognized as the start of the American Revolution.

In the center of the town, directly in front of the Lexington Green stands a statue of a proud minuteman holding a musket. The statue is of Captain John Parker. On the morning of April 19 Parker lead a small band of Lexington farmers into battle.

I have driven by that Parker statue many times and each time I admirer the determination, pride and character displayed by the figure.

Captain Parker was part of a well respected Lexington family. At various times his father, Josiah served as Lexington Town Clerk, Assessor and even a Selectman. Parker himself was a farmer, mechanic and life long resident of Lexington…born on Spring Street. He was “a stout, large framed man of medium height”. Parker was no stranger to military battle. Earlier in his life he fought in the French and Indian War at Louisbourg and Quebec and was a member of Roger’s Rangers. At the age of 26 he married Lydia Moore also of Lexington.

On the morning of April 19, 1775 Captain John Parker was 46 years old as he stood beside 76 other colonists and opposed 700 British Regulars. At the time he was terminally sick with tuberculosis. His illness forced him to bed early the night before (April 18, 1975). It was around 1:00AM when a messenger arrived informing him that the Regulars were marching to Concord. Parker and his men assembled on the Lexington Green and around 5:30AM three advance companies of British Regulars burst on the scene commanded by Major Pitcairn. 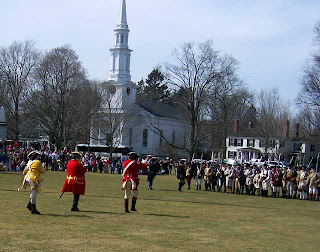 Many, many times historians have debated how the events unfolded that morning, but several things are indisputable…
Parker lined his men in two ranks, a proud stance for freedom challenging the world’s most dominant superpower… and the captain and his brave men weren’t looking for fight that morning, but they weren’t going to back down if one came …and it did.

Here is the text of Captain John Parker’s actual deposition given several days after the battle:

I, John Parker, of lawful age, and commander of the Militia in Lexington, do testify and declare, that on the nineteenth instant, in the morning, about one of the clock, being informed that there were a number of Regular Officers riding up and down the road, stopping and insulting people as they passed the road, and was also informed that a number of Regular Troops were on their march from Boston, in order to take the
Province Stores at Concord, ordered our Militia to meet on the common in said
Lexington, to consult what to do, and concluded not to be discovered, nor meddle or
make with said Regular Troops (if they should approach) unless they should insult us;
and upon their sudden approach, I immediately ordered our Militia to disperse and not to fire. Immediately said Troops made their appearance, and rushed furiously, fired upon and killed eight of our party, without receiving any provocation therefor from us.

Captain John Parker didn’t live long enough to see the United States officially declare its independence. He died of Tuberculosis a mere five months after the battle of Lexington and Concord…but his noble actions on April 19, 1775, so perfectly represented by that statue on the Lexington Green, sounded a declaration of freedom heard throughout the world.