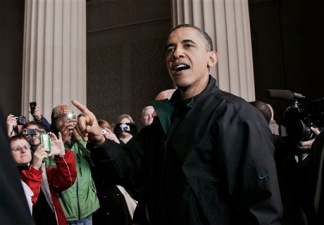 President Obama at the Lincoln Memorial on April 9, 2011 the same day he signed a short-term continuing resolution bill that will keep the federal government operating long enough for Congress to vote on a budget deal reached late Friday.

From the House Appropriations Committee – from Ranking Democrat Rep Norm Dicks regarding H.R.1473 :

“…What we achieved was an imperfect result, to be sure, but it represented a compromise that the President believed was in the best interests of the nation while protecting the highest priorities of his Administration and the Democrats in Congress.

Some examples from the legislation (these examples reflect areas of special interest to me):

• Community Health Centers are funded at $1.6 billion; $600 million below the enacted level and $414 million above HR1.

Check here for the expanded summary of the legislation from the Democratic view. For information from the full Republican-controlled Appropriations Committee report check here.

Of course, this is all “stop-gap” as the Congress is facing  a vote on the FY’12 full budget and a likely vote to raise the debt ceiling again.  A fiscal policy expert fron the very conservative Heritage Foundation recently noted in an NPR interview: “The middleweight fight is going to be over the 2012 budget resolution. And the heavyweight match will be over the debt limit.”