One of the most important American painters of our day is George Condo, who has deep roots in Chelmsford and at UMass Lowell, where his father, Pasquale Condo, was a longtime professor of mathematics. Condo was profiled by Jim Sullivan in yesterday’s Boston Globe.

One early influence on Condo was Kerouac: “But as a teenager he was more interested in music and the writings of Lowell native Jack Kerouac than in the visual arts. In 2006, Condo wrote the introduction to Kerouac’s ‘Book of Sketches.’  The author inspired him to develop his own ‘pure uncontrollable mastery of chaos,’ he wrote.”

Read the article here, and get the Globe if you want more reporting like this. A few months ago, Condo was the subject of an extensive article in the New Yorker magazine.

His paintings have always toyed with transgression. The faces of his subjects are often warped, disfigured, or caved in on themselves. His grotesques “are almost like musical variations on the portrait format,’’ Condo said.

“At a certain point the variations become the thing I’m interested in,’’ he said. “They’re more representative of the mental state of the character.’’

“His mind is sort of psychedelic, in a way,’’ said Girls guitarist Mark Dagley, a respected artist in his own right. Yet his friend has always had the outward bearing of “normalcy,’’ Dagley said.

And although Condo loved New England, Dagley said, “there was another element of how they lagged behind that really disturbed him.’’

And Condo has made a career of disturbance ever since. 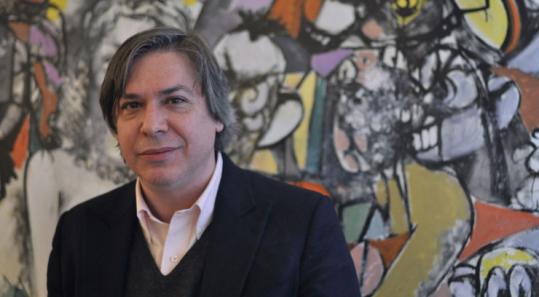