The moon is big tonight. 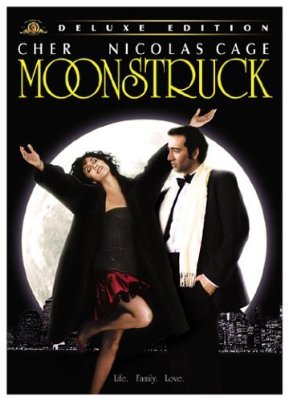 From the screenplay of the film “Moonstruck”: Old Man: “La bella luna! The moon brings the woman to the man. Capice?”

From Edwin L. Aguirre, Science & Technology Writer, UMass Lowell, Public Affairs: “The Full Moon rising after sunset tomorrow, Saturday (March 19) is the largest Full Moon of the year since the Moon reaches its full phase at 2:10 p.m. EDT, which is less than an hour from the time of the Moon’s perigee (closest distance to Earth). Thus, the Full Moon will appear about 14 percent bigger and about 30 percent brighter than when it is at its farthest, and it can produce exceptionally high tides. This is the largest perigee Full Moon since March 1993, or in 18 years. At perigee on Saturday, the Moon is 221,565 miles or 356,577 kilometers away from Earth. Below is a photo that Imelda and I took of the biggest Full Moon of 2010. Go out and take a look tomorrow night!” Largest full moon of 2010. (Photo by Joson-Aguirre, reprinted with permission)