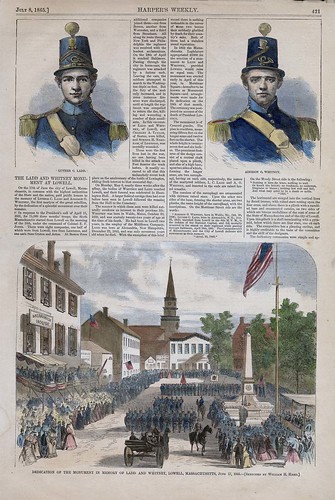 Thanks to Guy Lefebvre of the Lowell Gallery who sent along this print of the July 8, 1865 Harper’s Weekly which shows a story about the dedication of the Ladd & Whitney Monument in Lowell. Luther Ladd and Addison Whitney were two young mill workers from Lowell who were killed on April 19, 1861 in Baltimore while serving in the Sixth Massachusetts Volunteer Infantry Regiment, making them the first to die in battle during that conflict. The monument to their memory, shown in the above print, is located right in front of Lowell City Hall (which was not constructed at the time of the dedication). This year is the 150th anniversary of these events, so check back here frequently for more posts about Lowell in the Civil War and local events to commemorate the city’s role in the conflict.