The Hubble Space Telescope has produced another wonder, a view of what may be the oldest galaxy in the universe yet to be seen by humans. Read the NYTimes article here, and get the paper if you want more.

It is a smudge of light only a tiny fraction of the size of our own Milky Way galaxy, and it existed when the universe was only 480 million years old. Its light has been on its way to us for 13.2 billion years, making it the long-distance champ in an expanding universe. 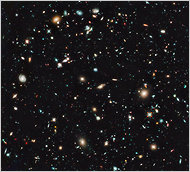