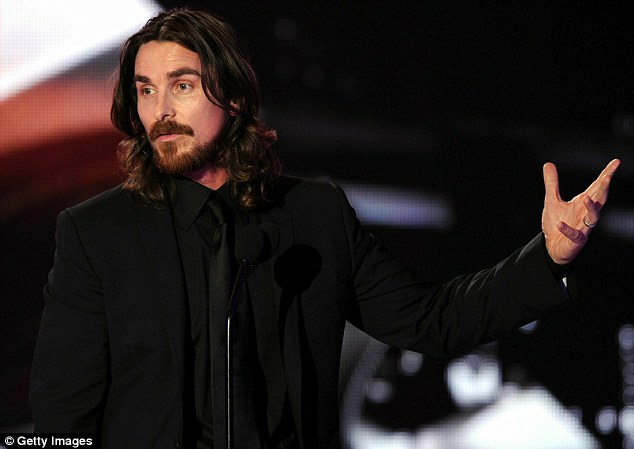 The Critics Choice Awards were held yesterday in Los Angeles –

Best Supporting Actor: Christian Bale (The Fighter) –  (From the UK”s Daily Mail) Actor Christian Bale won The Best Supporting Actor gong for his intense performance as former boxer Dicky Ekland in The Fighter. The star famously lost a substantial amount of weight to play the crack addicted character. And in his acceptance  speeech he dedicated the prize to Eklund, and said: ‘This feels great because I feel like he’s winning as well.’

The Fighter also won the Cast Ensemble Award along with a gong for Melissa Leo as Best Supporting Actress.

From Zap2-It:
“‘The Fighter’has been racking up nominations and wins this awards season.  Friday (Jan. 14), it won Best Ensemble Cast and Christian Bale took home Best Supporting Actor at the Critics Choice Awards 2011. In his speech, he profusely thanked the real-life Boston family upon which the movie is based. Later in the ceremony, Melissa Leo won Best Supporting Actress and also thanked the Ward family.”
But who are they?
Dick Eklund, the character Bale won his Critics Choice award for, was the boxing pride of Lowell, MA in the 1970s and 1980s. His most famous fight was against Sugar Ray Leonard in 1978, but his fame led to a downward spiral of crack addiction and prison.
Micky Ward (played by Mark Wahlberg), is Dick’s younger half-brother and sparring partner who took up boxing to support his family after Dick went to prison. He found much success and also helped Dick redeem himself, as Dick became Micky’s trainer after he was paroled.
Alice Ward is their 80-year-old mother — she is also mother to their seven sisters. Alice was hospitalized Wednesday (Jan. 12) following a cardiac arrest. She stopped breathing for 30 minutes and had been put on life support, but like both her sons, she fought her way back and is doing well.
Melissa Leo is garnering critical acclaim for her portrayal of Alice (and now a Critics Choice Award), as is Amy Adams for her portrayal of Charlene Fleming, the love interest of Micky Ward. All four main actors are up for Golden Globes, which airs Sunday night (Jan. 16).
Stayed tuned – the Golden Globe Awards will be presented tomorrow evening January 16th at 8PM (EST) on NBC.  “The Fighter” – director and cast – has six Golden Globe nominations.