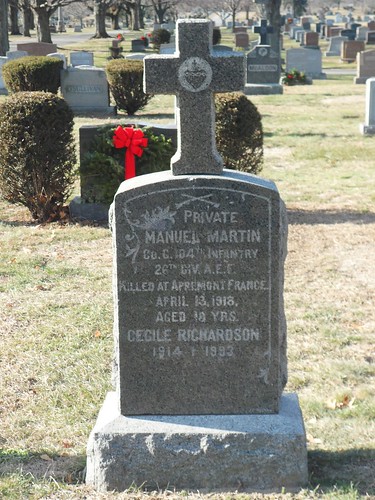 Last November, with the help of Eileen Loucraft (who also took the above photograph), I posted some death notices of Lowell residents who died in World War One. Here’s the beginning of my November 2, 2010 post:

Another Lowell man has given up the greatest treasure he possessed for the well-being of his country. Private Manuel Martin of Co. G, 104th U.S. Infantry, son of Mrs. Mario Martin, 1 Charles Street court, has been killed in action in France. His name is included in last evening’s casualty list. . .

Private Martin was 20 years of age. He was well known among the Portuguese-American residents here and had been employed as a carpenter before joining Co. G in February, 1917.

Somehow, that post received this comment from a family member living in Brazil who shared more information about Private Martin:

I am the last surviving nephew of Manuel Martin. I have his body-flag, his gold star, and a certificate of honor bearing his name and signed by President Woodrow Wilson. I have a daughter, Amanda, and a son, Brian, both of whom were born in Lowell, Massachusetts. Manuel Martin’s half-brother Benjamin Baptista (my father) died of a heart attack in 1974 in Brazil after retiring from the American company G. W. Murphy Industries, Inc. His other brother, Frank Baptista, an Air Force veteran of 22 yrs. service, died in an auto accident in 1981 after retiring from a lucrative career as a building-contractor in Valley Springs, California. Thank you for making this beautiful story available on the Internet. It means a lot to my family. I would also like to mention that Manuel Martin’s mother (my grandmother) died in Brazil after returning to that country and starting a dairy and vegetable farm in Piripiri.

Just last night, we received a follow-up from the same gentleman, Mr Baptista:

This is intended as a supplement to my post from December 12, 2010. I intend to go to Lowell early this Summer to see my daughter Amanda, son Bryan, and their children. I also intend to take photos at the cemetery where my Uncle Manuel as well as Aunt Sizaltina (his sister) are buried. My grandmother (Manuel’s mother) returned to Brazil with my father and uncle in 1933 for fear of losing her other two sons in another war. She would not touch the compensation money sent her by the Army because she said it ‘smelled like blood,’ and allowed my grandfather to use it only for the farm animals. My Aunt Sizaltina (mentioned above) conveniently missed the departing ship and remained in Lowell with her older sister Julia. I would like to donate to the city of Lowell Manuel Martin’s original Certificate of Honor from Woodrow Wilson. Please advise me as to the best way to do so. Thank you again for the honor you do my family with this page. God bless.

It is extremely thoughtful of Mr. Baptista to offer the certificate presented to the Martin family by President Woodrow Wilson to the city of Lowell. Between now and his arrival in the city, we’ll discuss an appropriate repository for this honorable artifact and a fitting way to remember Manuel Martin’s sacrifice. 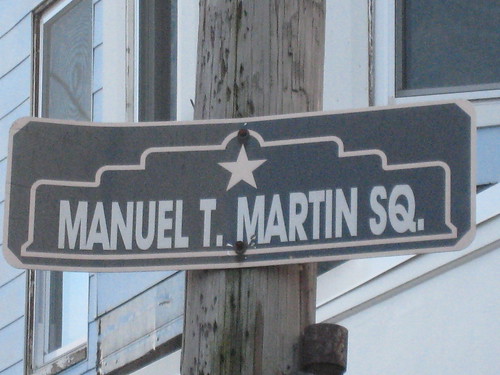