MassMoments reminds us that on this day – January 12, 1912 -the so-called Bread and Roses Strike of workers in our sister city of Lawrence Massachusetts began.

On January 12, 1912, workers in the American Woolen Company Mills in Lawrence, Massachusetts, opened their pay envelopes to find that their wages had been cut. They took to the streets in protest, beginning a history-making confrontation between labor and capital… 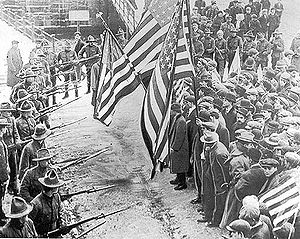 Massachusetts militiamen with fixed bayonets surround a group of  textile strikers in Lawrence.

Newspapers reported this ugly scene, and people all around the country were outraged. A congressional investigation began. As witnesses described working conditions in the mills and the events of the strike, President William Howard Taft ordered an investigation into industrial conditions in Lawrence and throughout the nation.

By March, the hearings had caused so much negative publicity that the American Woolen Company decided to settle. On March 12, 1912, management agreed to the strikers’ demands for a 15% pay raise, double pay for overtime, and amnesty for strikers. The striking workers had demonstrated a powerful lesson: even traditionally powerless groups such as women and recent immigrants could prevail if they worked together. 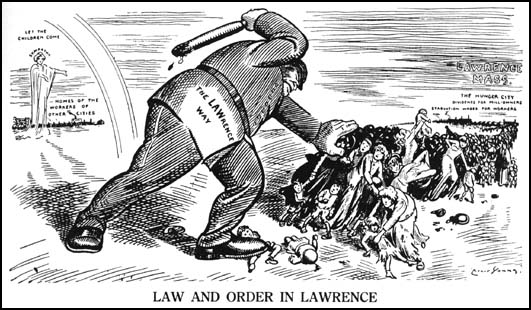 2 Responses to In the Merrimack Valley: Bread and Roses Strike – Lawrence 1912