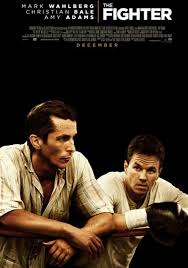 Tonight, with my wife and two friends I saw “the movie” at the Showcase Cinemas, just a slapshot away from Micky Ward Circle. The film ended two hours ago and I’m still in a kind of shock from the hyper-realism on screen. Lowell appeared to be under a colossal magnifying glass. The film felt as much like a documentary as it did a drama, and is a family story more than a boxing movie. More than a family story, though—a cultural story about people and lives and aspirations that are common across a certain segment of the social spectrum. My immigrant roots are in that segment. The film bangs a gong for anyone who knows Lowell. You walk out of the Showcase Cinemas, drive out of the parking lot, and you are on the movie set. I suppose that must be how lots of people in Los Angeles or New York City feel about being in TV-land or movie-land. The locations are like the back of your hand.

Knowing the outcome of the real-life story didn’t dilute any of the impact of the screen story. The acting was extraordinary throughout. The casting was tremendous. The portrayals of George Ward and Officer O’Keefe (as himself) were outstanding. Melissa Leo as Alice Ward dominated her scenes, even when backed by the seven weird sisters. My favorite fight scene was Amy Adams’ smackdown of one of the sisters during the attempted home invasion or sibling intervention (choose one) on Christian Hill. Christian Bale deserves a prize for his work—just the physical aspect would be enough to win, never mind the talk. My favorite Lowell scene was Bale running across the bridge. And Mark Wahlberg holds the social cyclone all together as the steady, modest moral center of this fractured but winning parable.

I’ve worked with a lot of folklorists in my career. This film is a field day of deeply local popular culture in a post-industrial city. Speaking of which, the Industrial Revolution that some people like me have made so much of as part of Lowell’s revitalization is tossed off as a joke when it comes up in the notorious HBO documentary about “crack street.” The ending is more complex than someone might expect, mostly because of the inner life of the hero. Just when the viewer expects him to pull out of the tribal quicksand, he reaches back for what he knows best and finds some kind of middle ground or third way through his own will power. Humanity in many but not all of its shades is on display here. I’ve always said the whole world is in Lowell if you look hard enough. “The Fighter” is film art in peak condition. Let’s have more of it, more Lowell stories, more cinema visions, more movie art for more human good.

6 Responses to Here’s My Review of ‘The Fighter’