This reminder was sent by Jim Dyment of VYU arts magazine and the Whistler House Museum of Art: 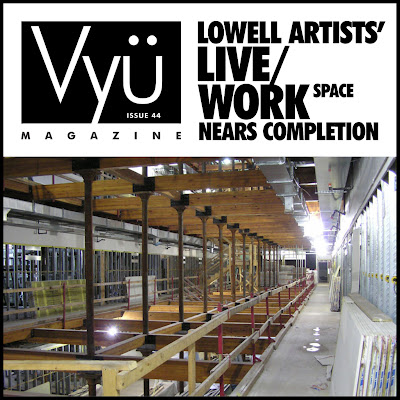 “Another neighborhood comes back to life as the Appleton Mills building on Jackson Street nears completion. It’s been under construction for months and this project is one more step in the process of revitalizing the JAM (Jackson Street, Appleton Street, Middlesex Street) section of the city of Lowell.

“The building is actually three buildings that through renovations have grown together,” said Nancy Ludwig from Icon Architecture of Boston. These buildings were constructed in the early 1900s and the post and beam structure was originally built to house heavy looms. Although they were built for utility, it seems there is a definite charm to the large arched windows and brick façade that makes this kind of project a desirable place to live. The architectural firm “designed this live/work community to both engage the surrounding historic neighborhood and, yet, actively display the creativity of the community of artists within,” Ludwig explained.

“The current renovation was rather complicated since the buildings were abandoned for years and the top floor was burned in a fire. The wooden members had to be replaced and there was almost no flooring that wasn’t damaged by water infiltration. Many of the steel and cast iron columns were salvaged and reused. The structure had to be reassembled.

“The south façade of the Mill was carefully restored with innovative staging and scaffolding because it is directly on the wall of the Hamilton Canal. “Cleaning the exterior and replacing windows dramatically improved the look of the façade,” said Ludwig. One side of the building has a contemporary treatment to the exterior because a lot of the historic fabric was removed during demolition by a previous owner. Icon Architecture decided on an industrial aesthetic to complement the original appearance. It makes perfect sense because of the fact that this was originally an industrial building.

“Appleton Mills is an important part in the history of the Hamilton Canal District. The buildings are on the National and State Registers of Historic Places and they are included in both the Lowell National Historical Park & Preservation District and the Locks and Canals Historic District. Applications are now being accepted for rentals. Don’t miss this great opportunity.

“Deadline for Applications is December 31, 2010. Click Here to See a Nearly Completed Unit and More Information. Contact www.liveappletonmills.com   or 978.458.0588″