The top story in the NYTimes online at this hour is the loss of six more US soldiers in Afghanistan, killed when a van loaded with explosives blew up at an outpost manned by US/NATO and Afghan troops. Many Afghan and US soldiers were wounded in the attack, for which the Taliban claimed responsibility. Read the news here, and get the Times if you want more.

This week, I finished reading “The Good Soldiers,” David Finkel’s riveting account of one battalion of US soldiers during the “surge” in Iraq in 2007-08. Finkel’s eyewitness reporting on the brutal day-to-day conditions in Iraq is one of the best books about war that I’ve read. The word that comes up when I want to talk about the book is “carnage.” The horrific killings, woundings, and torturings of Americans, Iraqis, and others would seem to be something out of the Middle Ages or First World War (which this blog has been chronicling). Finkel shows us the staggering disconnect between the crazed clerics and eager politicians driving the rhetoric from the top and the individuals on the ground who pay with their lives and livelihoods. The psychological damage all around is immense. Someone said “the real impact of the war in Iraq hasn’t been felt yet.” That’s something to worry about. 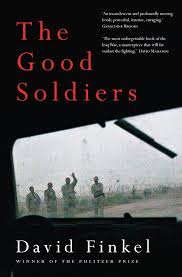