I’m not the first to say this is a powerful book. Filkins won awards from the National Book Critics Circle and NYTimes Book Review. It was a best-seller in hardcover. I lent my first copy to someone, and it went into the book-loan twilight zone, which is why I bought the paperback about a month ago. I recalled being so impressed upon reading it the first time. I hadn’t read such gripping prose about war since reading Michael Herr’s “Dispatches” about the Vietnam War in the ’70s. I went back to the book for more than the literary kicks, though. Filkins’ eyewitness accounts of Afghanistan in the run-up to 9/11 and the early years of the Iraq war provide helpful perspective to the daily news reports from the war zones and political rehashing of policy decisions in the past ten years.

Filkins manages to put the humanity up front in his bursts of nearly real-time reporting. He worked from a stack of hundreds of notebooks that he’d filled on the run, while taking cover, and literarally under covers in some instances when he had to write with the flashlight hidden. He doesn’t appear to spare any detail, no matter how gruesome, in conveying the raw barbarism of war-fighting and what it does to the killers and casualties. He tracks a couple of the family stories back to the U.S. and puts a face on the homefront as well. There’s no neat conclusion at the end because the fighting goes on (“The Forever War”) even though he exits the battlefield. I heard he’d recently gone back to do more reporting. The book is structured as a collection of scenes really, like a slightly disjoint documentary film. Some of the chapters are only a few pages long. One reviewer described the book as a “kaliedoscope of images and intensity.” Most of all, I recommend the book for what the reader will learn about the people and culture of those nations where the United States and many other countries have been engaged in a bloody and mind-bendingly complicated fight against adversaries whose eyes see a different world than ours do. 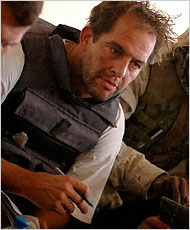 4 Responses to Book Review: ‘The Forever War’ by Dexter Filkins