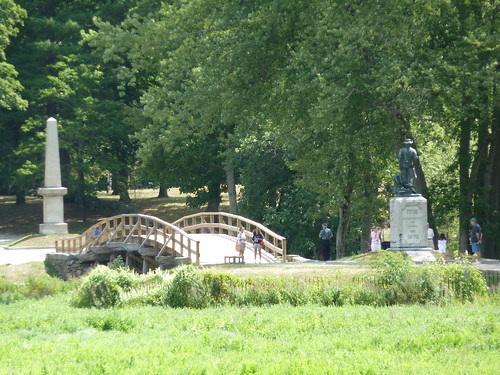 By the rude bridge that arched the flood,
Their flag to April’s breeze unfurled;
Here once the embattled farmers stood,
And fired the shot heard round the world.

We took advantage of today’s beautiful weather and took an excursion to Minute Man National Park in nearby Concord, Lincoln and Lexington. I’ve been a dozen times, but each new visit brings an appreciation of what happened on April 19, 1775. For instance, I’d always known that the North Bridge was significant because there the colonists first inflicted casualties on the “regulars” (a ranger corrected me when I referred to them as “the British” because at that time, everyone was still British), but the — tactical situation, shall we say? — at the bridge always confused me. After conversing with a park ranger, here’s how I now understand it:

The objective of the British army column was to march out from Boston through the night of April 18-19 and arrive in Concord at daybreak to find and seize arms (including four cannon possessed by the Massachusetts militia) and ammunition. Because of the excellent intelligence service organized by Paul Revere and his companions, colonial militia as far north as Dracut knew of the army’s approach before the troops had finished crossing the Charles River into Cambridge. Shortly after dawn, the 700 soldiers encountered the 80 members of the Lexington militia on that town’s common. Shooting erupted and eight militia were killed. The British army column continued on to Concord.

While the bulk of the force searched the town, a group of about 200 soldiers was detached to search Barrett’s Farm which lay to the north of the Concord River. When that group reached the North Bridge, about 90 soldiers stayed protecting the bridge while the rest of the force continued on to the farm which was some distance inland. On a hilltop not far away, the Concord militia along with other militia units from the region that were constantly arriving sat, watched and waited. Soon the militia saw smoke rising from the direction of the town. Thinking the troops were burning the town, the militia advanced on the bridge, intending to rescue Concord from the torch. (Unbeknown to the militia, the fire had started accidentally, was confined to one building, and was quickly extinguished with the help of the British soldiers). The soldiers pulled back to the south side of the bridge and the militia massed on the north side. Someone fired and volleys rang out from both sides. Two British soldiers were killed and the rest of the 90-man detachment fled back to town leaving the militia in control of the bridge.

The mystery to me has always been what happened to the British army detachment at Barrett’s Farm, because they were now on the wrong side of the river with their route over the bridge and back to town blocked by the militia. According the the park ranger I spoke with today, that detachment simply marched back across the bridge, passing through the militia and the bodies of the two English soldiers without incident. It was almost as if no one wanted to believe what happened.

The British soldiers rejoined their companions and then commenced the very long and deadly march back to Boston, for along the entire route they were ambushed and fired upon by up to 4000 colonial militia. Much of that route has been restored to its 18th Century condition by the National Park Service and can be found adjacent to the NPS Visitor Center on Route 2A in Lincoln, right near Hanscom Field. All of these sites are only 30 minutes from Lowell and can easily be seen in part of one day. It’s a visit well worth making.