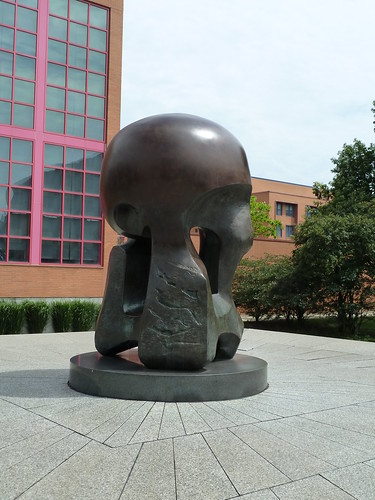 One reason history is my favorite subject is that it is composed of stories that, though true, often defy belief. Such is the case with the first controlled nuclear reaction which occurred on December 2, 1942 on a squash court under the bleachers at the University of Chicago football stadium (known as Stagg Field). That such a momentous and potentially dangerous experiment was conducted in the middle of one of the largest cities in America has always astonished me. Did Enrico Fermi and his colleagues simply disregard the risk to the surrounding area? Were they unaware of that risk? Or was this an example of the exigencies of wartime? Whatever the case, on my recent visit to Chicago, the site of this historic event was on my list of places to visit.

On December 2, 1965, the sculpture shown above, created by Henry Moore and called “Nuclear Energy” was dedicated. That was the “25th anniversary of the first controlled generation of nuclear power, an experiment by Enrico Fermi and his colleagues.” The site was designated a Registered National Historic Landmark in that same year.

The plaque at the entrance to the site reads as follows: