On the eve of the Sesquicentennial of the Civil War, the National Trust for Historic Preservation reminds us that while many among us respect the sanctity of Civil War battlefields such as that of  Gettysburg – others have different ideas. While many see the historic and cultural heritage  value in these sacred spaces, others would exchange a national treasure for other gain.

Historic preservationists are pitted against the realities of a tough economy and high unemployment. Preservationists declare that a casino so close to the battlefield is inappropriate while proponents claim that a casino will enhance the tourist options and provide jobs. In his Preservation Magazine article, Darrin Youker notes:

At issue is a new casino proposed for a location just half a mile from the site where Union troops pushed back Confederate forces and turned the tide of war. In 2005, preservationists and residents led a grassroots effort to defeat a similar casino proposal. Now, the same developer, Gettysburg businessman David LeVan, wants to build a casino inside the Eisenhower Resort and Convention Center on the famed Emmitsburg Road.

From his interviews on both sides of the issue:

“Adams County can no longer depend on its Civil War tourism legacy alone,” says David La Torre, a spokesman for the casino developer.  “Unemployment here is over eight percent, the highest in a quarter-century. Gaming has created 12,000 full-time jobs across Pennsylvania.”

For opponents it’s about the location: “It is a nationally important Civil War site that was preserved in memory of one of the nation’s bloodiest battles,” says Walter Gallas, director of the Northeast Field Office of the National Trust for Historic Preservation. “The developer saying that he wants to piggyback on that and put in a casino is an inappropriate response.”

“It’s a major insult to this nation,”  says Susan Star Paddock, a Gettysburg resident leading the fight to defeat the casino. “A casino would never be considered this close to Ground Zero, or the Arlington National Cemetery.”

And so the debate continues. Read the full article here. Stay tuned.

A Massachusetts Connection – Here is the 2nd Massachusetts Infantry Monument on the Battlefield at Gettysburg. (Of  local note: Many men from Tewksbury made up part of  a company of soldiers that took heavy casualties in this area during the battle at Culps Hill.) 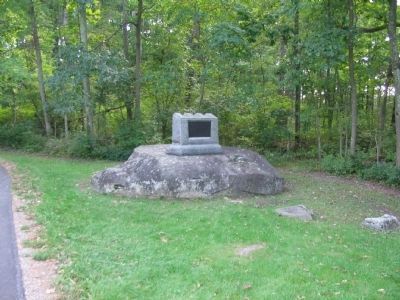 From the hill behind this monument on
the morning of July third 1863 the
Second Massachusetts Infantry
made an assault upon the Confederate
troops in the works at the base of Culp’s
Hill opposite. The regiment carried to
the charge 22 officers and 294 enlisted
men. It lost 4 officers and 41 enlisted
men killed and mortally wounded and 6
officers and 84 enlisted men wounded.
To perpetuate the honored memories of
that hour the survivors of the Regiment
have raised this stone. 1879.

2 Responses to Casinos: A Preservation and Battleground Issue in Gettysburg