Picking up on Tony’s post about Hemingway, I want to add a Kerouac thread to the discussion. Hemingway’s stories influenced Kerouac’s early work. In early 1942, 19-year-old Jack Kerouac was writing sports articles for the Lowell Sun and at the same time conceiving what he pictured as a trilogy of novels based on his life in the city at that moment. He picked the name Robert Duluoz for the character based on himself and set the narrative in Galloway, the same name that would serve as a stand-in for Lowell in his first published novel, “The Town and the City” (1950). In 1967, living on Sanders Avenue in the Highlands after he married Stella Sampas, Kerouac revisted the 1942 material and wrote the novel “Vanity of Duluoz: An Adventurous Education, 1935-46,” which was published in 1968 while he was still living in Lowell. At the end of the novel the narrator addresses his wife, saying, “…I did it….But nothing ever came of it. No ‘generation’ is ‘new.’ There’s ‘nothing new under the sun.’ ‘All is vanity.’ ”

The book titles for the trilogy were projected to be “The Vanity of Duluoz,”  “The Vexation of Duluoz,” and “The Joy of Duluoz.”  Here’s what I wrote in a headnote to an excerpt from “The Joy of Duluoz” that was published for the first time in “Atop an Underwood: Early Stories and Other Writings” by Jack Kerouac (Viking/Penguin, 1999): “Kerouac takes the titles of the books in the Duluoz cycle from Ecclesiastes; or, The Preacher, Chapter 1, the same section of the Bible that Ernest Hemingway mined for the title and epigraph of his novel ‘The Sun Also Rises.’ Verse 14 relates to Kerouac’s vision: ‘I have seen all the works that are done under the sun; and behold, all is vanity and vexation of spirit.’ ”

Here’s the opening of  Ecclesiastes. Note the phrase “The sun also riseth,” which Hemingway altered slightly for his book title.

“The words of the Preacher, the son of David, king in Jerusalem. Vanity of vanities, saith the Preacher, vanity of vanities; all is vanity. What profit hath a man of all his labour which he taketh under the sun? One generation passeth away, and another generation cometh: but the earth abideth for ever. The sun also riseth, and the sun goeth down, and hasteth to his place where he arose.”

The lead illustration is a cover design from England with a slightly different subtitle than the first U.S. edition, which is seen below. Looking closely, you can see the triple image on the bottom of the cover below is a detail of a photograph of Kerouac wearing a football helmet at Lowell High School. 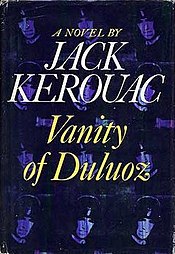 One Response to Kerouac and Hemingway