We’re re-introducing Marie Louise St. Onge to our readers. She grew up in Lowell’s Franco-American community and lives in Maine now. Marie Louise is a co-author of French Class: French Canadian-American Writings on Identity, Culture, and Place (Loom Press, 1999) and lead editor of Ad Hoc Monadnock: A Literary Anthology (1995). She is represented in Balancing Act 2: An Anthology of Poems by 50 Maine Writers (2018). Her poem “Thaw” appeared on this blog in 2011.  We welcome her back.—PM 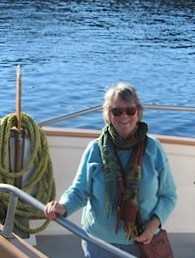 “I had nothing to offer anybody except my own confusion.”

Inside the rows of ancient brick, shuttles flew back

and forth, a rapid measure followed by the dull thunk

of beaters on looms the size of rooms. Canals spooled

through the city inky and restless, reaching for the wider waters

of the Merrimack and a salty mouth to set them free.

from a ceaseless summer, the ache of the news, and the vapors

of a worrisome home. Walking, I’d take time to wish myself up

leaning on canes, and I’d fly away the way a dream does in morning.

and tomato for a woman who arrived daily at 11 and sat in the same booth,

coffee for the debauched insurance man who knew where to prey, Cokes for kids

my same age who never left a tip, and frappes for the older girls with blonde beehives

who told me I should shave my legs and put on lipstick.

toward some imagined relief. Next door, the tailor repaired things eleven hours a day

six days a week, sitting with his head down at a tiny table, as suit coats and shirts

wearing paper tags breezed by overhead on a trolley that went nowhere.

On a shadowy October day, Kerouac was buried in the Edson Cemetery in Lowell

wearing too much makeup and holding rosary beads. A nun who taught English

at my school snuck out to attend his funeral. She crossed the street (and the principal)

but didn’t take her students. All this played out on one of the grandest boulevards,

The summer after they buried Jack, I was restless. Sweetland Gardens wasn’t

so sweet anymore. I went to work in the Wannalancit Mill. My tasks were simple

and taxing. The boss was a small man with a pathetic mustache, dingy short-sleeved shirts

and a loathing attitude. On a sunny Tuesday morning, bewildered by my routinous duties

and unsure, I quit before the first break’s bell.

From there, life unraveled with predictability and surprise. Confused about

almost everything, I tried everything. I tried too hard. Some things held the promise

of an April robin, others held the lack of an empty baptismal font.

Inky canals, trolleys and boulevards take us somewhere, they take us

on a trip around the world, to the small planet called home.